What Was it Like to Land at Ellis Island?

Chalked  full of a rich history, Ellis Island was the leading port of arrival for the United States for sixty years. Read more about this historic place and the inspirational stories of immigrants past. 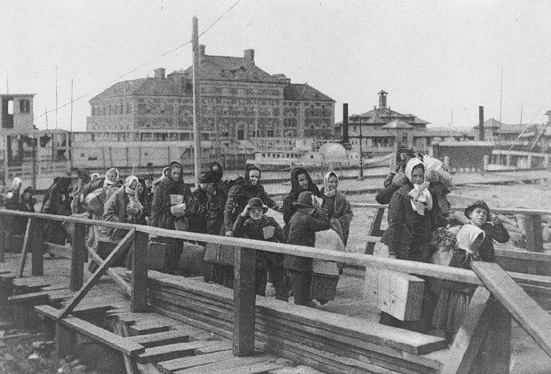 Ellis Island, in Upper New York Bay, was the gateway for over 12 million immigrants coming to the United States from January 1, 1892 until 1954 when it closed. In our Genealogy Gems Podcast #199, Lisa shared a blurb from Profile America, regarding Ellis Island in which a few key facts were shared.

Many of our ancestors first stepped ashore at Ellis Island when they came to America seeking a new life. I can only imagine their first thought might have been, “Get me off this boat!” But then, perhaps there was worry and trepidation. Would they be sent home because they were sick? Would they find work, a place to live, or food to eat?

Immigration Day at Half Day School, Lincolnshire, Illinois. 2010. Courtesy of the author.

The very first immigrant was processed in 1892. Her name was Annie Moore and she was a 15-year-old Irish girl. [1] Can you imagine?

One elementary school in Lincolnshire, Illinois recreates this event with their yearly “Immigration Day.” Immigration Day is for all 3rd and 4th students to participate in what it’s like to come to this country for the first time. They dress up, pack up a few belongings, receive little tickets and passports, and experience in a small way the history of many of their ancestors.

Arriving on land again must have been quite the relief to passengers. Especially those in steerage. Steerage or third class passengers traveled in crowded and often unsanitary conditions near the bottom of the ship. Upon arrival in New York City, ships would dock at the Hudson or East River piers. First and second class passengers would disembark, and pass easily through Customs. They were free to enter the United States. The steerage and third class passengers, however, were transported from the pier by ferry or barge to Ellis Island where everyone would undergo a medical and legal inspection. [2]

If the immigrant’s papers were in order and they were in reasonably good health, the Ellis Island inspection process would last approximately three to five hours. The inspections took place in the Registry Room (or Great Hall). Here, doctors would quickly look over every immigrant for obvious physical ailments.

If the immigrant was found with a minor ailment, broken bone, or found to be pregnant, they would be sent to the “Island Hospital, built to restore the health of people suffering minor injuries [and] broken bones.” [3]

The ship’s manifest log, that had been filled out back at the port of embarkation, contained the immigrant’s name and his/her answers to twenty-nine questions. This document was used by the legal inspectors at Ellis Island to cross-examine the immigrant during the legal (or primary) inspection. [4]

There are some genealogical myths regarding Ellis Island. Many believe that their ancestors surnames were changed when they arrived. Some even believe the name change was due to the lack of native speakers of different languages and an overall lack of communication. This is not the case.

Vincent J. Cannato’s book American Passage: The History of Ellis Island explains why this did not happen:

Nearly all […] name change stories are false. Names were not changed at Ellis Island. The proof is found when one considers that inspectors never wrote down the names of incoming immigrants. The only list of names came from the manifests of steamships, filled out by ship officials in Europe. In the era before visas, there was no official record of entering immigrants except those manifests. When immigrants reached the end of the line in the Great Hall, they stood before an immigration clerk with the huge manifest opened in front of him. The clerk then proceeded, usually through interpreters, to ask questions based on those found in the manifests. Their goal was to make sure that the answers matched. (p.402)

A First-hand Look at Ellis Island

The official, award-winning documentary shown today at Ellis Island (more about that here) is available to watch online below. It is a wonderful way to get a first-hand look at what it felt like to land at Ellis Island and the a land of liberty.