Found in an Archive: 10 Unexpected Discoveries

What we expect to be found in an archive is documents, photos, memorabilia and other paper-based items. But the Archive Lady Melissa Barker’s list of “most unusual discoveries” reminds us to expect the unexpected in archival collections! Read about her top ten unique and exciting archive discoveries. 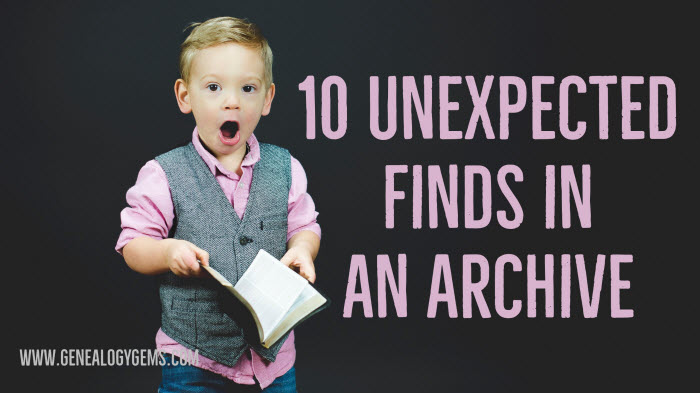 Working in an archive everyday like I do in the Houston County, Tennessee Archives, you can come across some of the most interesting items! Here is a list of my top 10 discoveries. 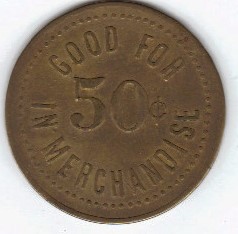 All images in this post courtesy of Melissa Barker and Houston County, TN Archives, except as noted. 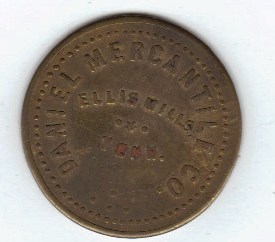 While working on circuit court case packets, I ran across one for William Hughes who was charged with going armed with a straight razor in 1952. The actual straight razor was in the packet and just as sharp as it was back in 1952. 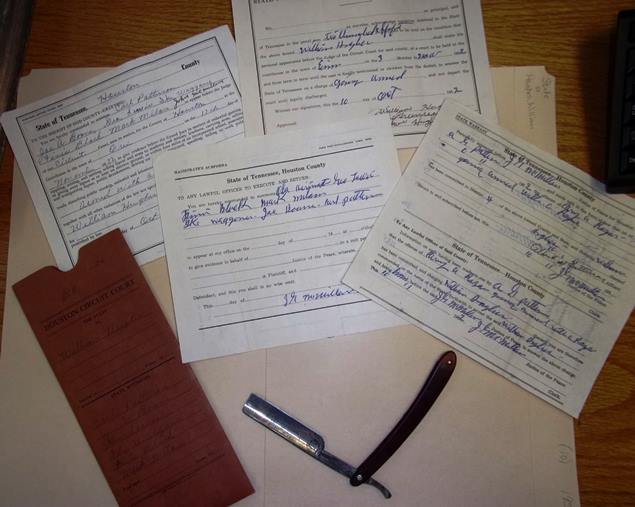 While processing a collection of voting and election records, I found a 1952 local city ballot that had a handwritten fudge pie recipe written on the back. I actually made the pie and it was wonderful! 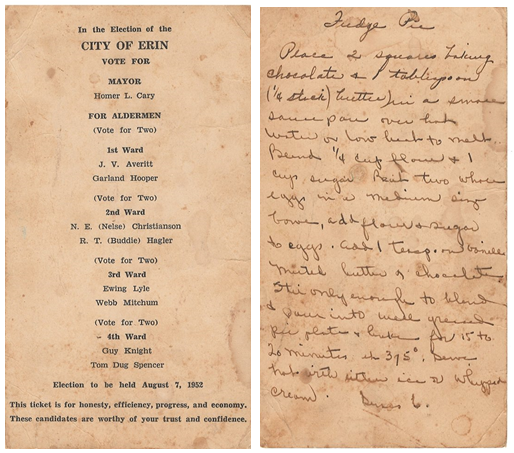 While processing a manuscript collection of various types of records, I found a lock of hair tied with a blue ribbon that was in perfect condition. The lock of hair was in a harmonica box and addressed to a gentleman and had been sent through the mail. So far we have not been able to determine whose lock of hair it is. 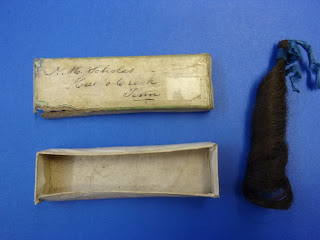 Recently a man walked into the archives and donated a 100 year old vacuum cleaner. This vacuum cleaner is motorless and looks just like the Bissell vacuum cleaners you can buy today. The crazy thing is, it still works! 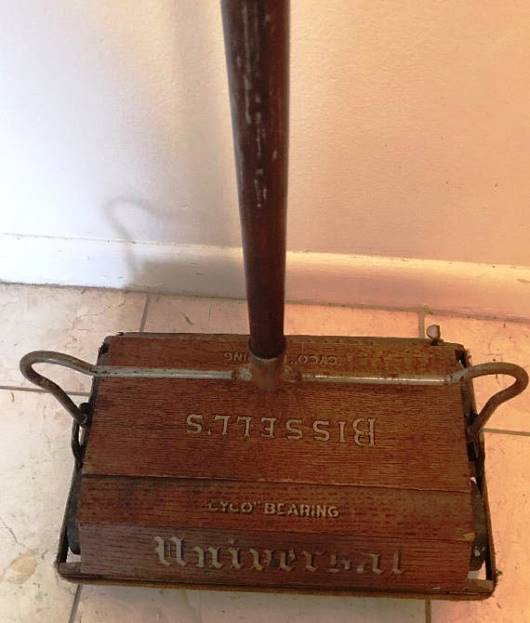 Recently a patron donated an old photo album that had belonged to her Grandmother who had owned the local hotel back in the 1920s. The photo album included a photo of a lady holding a very, very large snake. There is a name of “Mille Viola” on the photo and it was taken at Kern Bros. Photographs in New York. 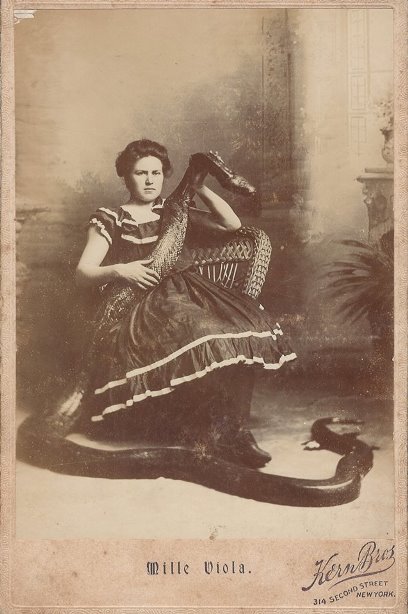 In the archives, we have come across a couple of examples of the moonshine trade. In our court records, there are numerous court cases about moonshiners. We also have several photographs of bottles of moonshine and stills. Seems it was very popular to take photographs of what the police had collected. 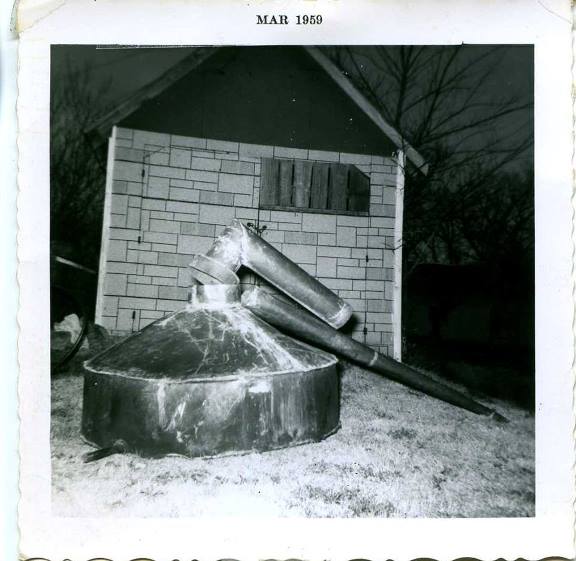 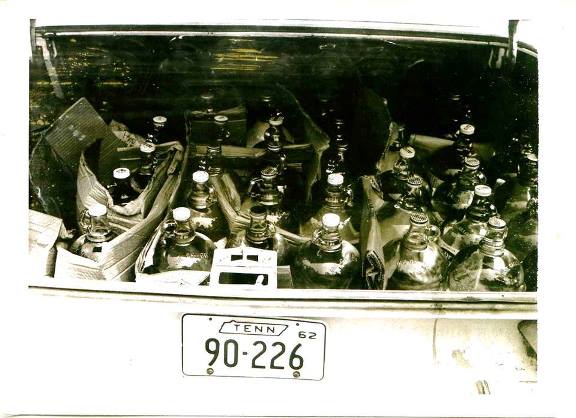 In one of the wonderful scrapbooks that we have at the Houston County, TN. Archives, there is an original 1943 Grand Ole Opry Ticket. 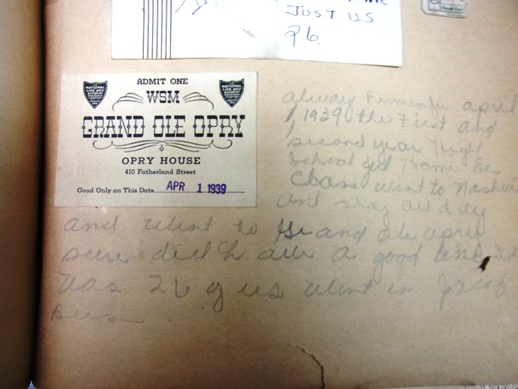 The railroad once went through many communities and areas including Houston County, TN. We have many items to help us remember the railroad, like railroad spikes, lanterns, and tools used to work on the railroad. 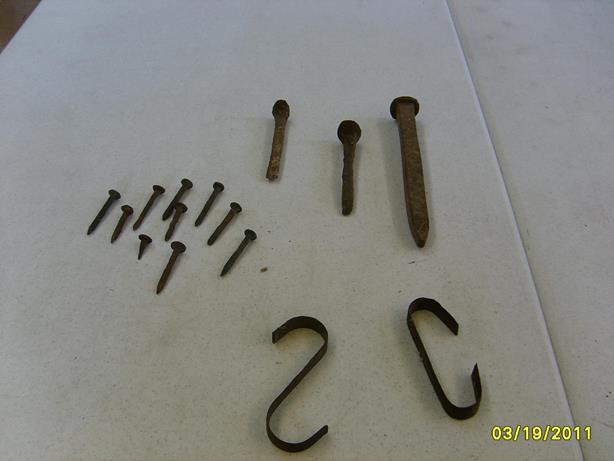 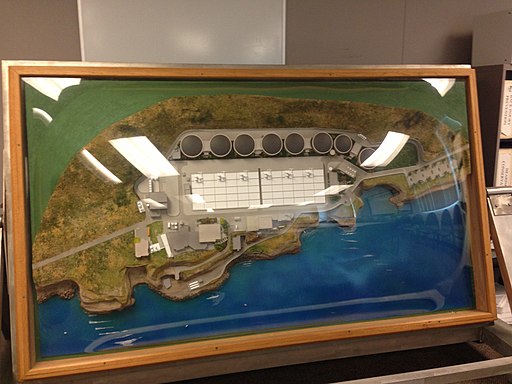 By Tracyleanne (Own work) [CC BY-SA 3.0 (https://creativecommons.org/licenses/by-sa/3.0)], via Wikimedia Commons. Click to view.

Melissa doesn’t have images of her dioramas–and every diorama is different–but here’s an example of a diorama of a wastewater treatment plant. (People create dioramas of diverse places, don’t they?)

What Have You Found in An Archive?

What treasures or unusual have you discovered in an archival collection? Tell us in the comments below!