Here are the latest genealogy records newly online from Findmypast. You’ll find a large selection from Scotland, and others from around the world. 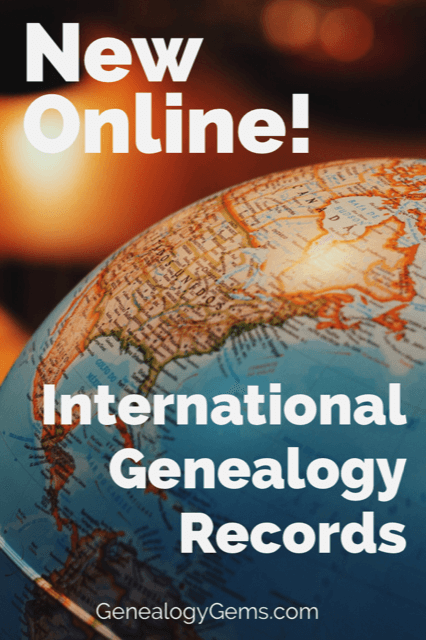 The publications mostly date from the 19th and early 20th centuries, they include memoirs, genealogies, and clan histories. There are also publications that have been produced by emigrant families.

Each record includes a transcript and an image of the original newspaper announcement. The amount of information listed varies, but most records will list a combination of your ancestor’s birth date, birth place and parents’ names.

Scotland, Newspaper Marriage & Anniversary Notices
A further 201,000 new records have also been added to our notices of marriages and anniversaries.

Also taken from our existing collection of historical newspapers, the records will include a combination of your ancestor’s marriage date, marriage place, spouse’s name and parents’ names. Images of the original notices may reveal additional details.

Scotland, Newspaper Death Reports & Obituaries
Over 500,000 additional records are now available to search. This collection of newspaper death reports and obituaries may reveal interesting or undiscovered stories surrounding your ancestors’ life and death.

Transcripts will reveal your ancestor’s death date, age at death, parents’ names and the name of their spouse.

Scotland, Glasgow & Lanarkshire Death & Burial Index
Over 37,000 records have been added to the Glasgow & Lanarkshire Death & Burial Index. These new additions cover Bent Cemetery in Hamilton and consist of transcripts of original documents that will reveal a combination of your ancestors’ birth year, death and burial dates, age at death, burial place and mortcloth price.

Scotland, Court & Criminal Database
Over 28,000 records from the Fife Kalendar of Convicts have been added to our collection of Scottish crime records.

The result of a 20 year project by Andrew Campbell of the Fife Family History Society, the Kalendar is an indexing to many of the courts in Fife as well as the High Court between 1708 and 1909. It includes information taken from a variety of sources ranging from court, prison and transportation records to births, marriages, deaths and newspaper reports.

Each result will include a transcript of the original document. The amount of information listed in each transcript will vary, but most will reveal a combination of the accused’s name, birth year, birth place, address and occupation, the nature of their offence, the date and location of their trail as well as the sentence they received.

Some records will also include trial notes, verdict comments, details of previous convictions and additional comments.

Church of Scotland Ministers 1560-1949
Explore PDF images of the “The Succession of Ministers on the Church of Scotland from the Reformation”. Compiled by Hew Scott, D.D., The work was revised and continued up to 1949 under the Superintendence of a Committee appointed by the General Assembly.

As quoted in the book, “the design of the present work is to present a comprehensive account of the Succession of Ministers of the Church of Scotland since the period of the Reformation. An attempt is made to give some additional interest by furnishing incidental notices of their lives, writings and families, which may prove useful to the Biographer, the Genealogist, and the Historian.”

Isle of Man Roll Of Honour WW1
Find your Isle of Man ancestors who fell in the Great War. The Isle Of Man Roll Of Honour recorded the names of more than 1,900 men who died during the First World War or died as a result of wounds, injury or disease contracted on active service. These transcripts will reveal your ancestor’s rank, regiment, parish and biography.

Originally published in 1934 by the War Pensions Committee, the publication was funded entirely by Lord Stanley, Earl of Derby.

In 1936, the War Pensions Committee donated copies to each parish church throughout the island.

The foreword, provided by Lord Stanley, reads ‘It is well that the deeds of those who died in the Great War should find a permanent memorial in such a list. Whilst this generation lives their names will not be forgotten, but other generations will arise to whom they will not be personally known. This Roll will serve to keep their memory green and future Manxmen and Manxwomen, when reading it, will realise that in our great struggle the Isle of Man played a noble part’.

International Records Update – Czech Republic
Two new Indexes, Czech Republic Births & Baptisms 1637-1889 and Czech Republic Marriages 1654-1889 are now available to search. These transcripts will provide you with vital dates and locations as well as the names of parents and spouses. Hints will also be generated from these records against any matching names stored in your Findmypast family tree.

These records will enable you to determine when your ancestors died, where they were laid to rest, when they married and the name of their spouse.

International records update – Finland
Search for your Finnish ancestors in three indexes of more than six million baptisms, marriages and burials between 1657 and 1909. These transcripts will also generate hints against any names stored in your Findmypast Family Tree.

Cemetery records are of great importance in discovering where and when your ancestor died. They can also provide you with information regarding their birth and marriage dates.

With an abundance of cemeteries, it can be overwhelming trying to pinpoint the precise cemetery in which your ancestor was laid to rest, and visiting each potential location is costly. However, in partnering with BillionGraves, we aim to make available all the cemetery records held on their site for free, saving you time and money as you search for your ancestor. BillionGraves is the largest resource for GPS-tagged headstone and burial records on the web, with over 12 million headstone records.

International Records Update – Netherlands
Unearth your Dutch roots with three indexes to more than three million births & baptisms, marriages, deaths and burials that took place in the Netherlands between 1564 and 1945.

These transcripts were sourced from the International Genealogical Index and will generate hints against your Findmypast family tree.