Gail Rogers in Ottawa, Ontario, Canada recently shared how my presentation on using Google Earth for genealogy helped her find her way to the site of an old family business–and the place where her ancestor died. She’s given me permission to share it with you. I hope you find it as inspiring as I do!

“Just last week, I received an 1879 death certificate for my great-great-great-grandmother.  She ran The Castle Inn in Stafford, Staffordshire, England after the death of her husband in 1863.  To my sorrow and horror, I learned that she hanged herself probably within the establishment where she also lived!

“When I shared this with a group of English and Australian cousins who are also researching this family, one of them sent me a link to a 1960s photo of The Castle Inn, shortly before its demolition:

“Then I remembered your presentation about pinpointing your ancestor’s home in San Francisco.  I’ve had several “family history” maps with icons that I’ve been working on for the past five years at Google Maps, so I went to the one for my Staffordshire ancestors, clicked on my icon for Eastgate Street in Stafford, and used the Street View to wander down the street, looking for the outline of the roofs, as you did with your old family photo. (You can view a video of my Google Earth for Genealogy class for free here on my website that demonstrates this technique.)

“I soon spotted the outline at the extreme left of the photo, “turned around” (virtually) and wham!  There were the double Elizabethan-style timber-framed gables, just as they appeared in the older photo!” 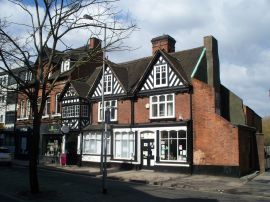 Gail, I was so glad to read that this helped you. I’ve gotten so much great feedback on that particular example of how to use powerful Google Earth (and Google Maps) tools to find important family landmarks. 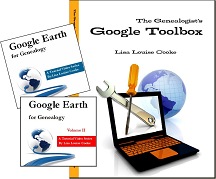 The presentation she’s talking about can be found in The Genealogist’s Google Toolbox Kit, a value bundle that includes my book The Genealogist’s Google Toolbox and Volumes I and II of Google Earth for Genealogy (on video CD). Even better, right now that kit is available for 20% off! The 2 discs are also available as a bundle on their own. And thanks, Gail, for sharing your success with us!

Google Earth has been hard at work, adding more in-depth image coverage to its already vast 3D visual archive of the world’s places. You can now take 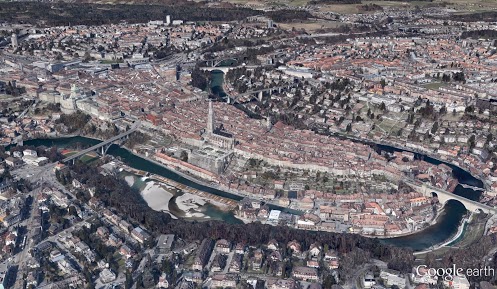 a free high-res virtual tour of the following cities:

Want to learn more about using Google Earth for family history? These two videos give you a glimpse into my Google Earth for Genealogists series. Watch these clips and be inspired about the potential of this powerful online tool for mapping and imaging your family past.