Early registration for the 35th International Conference on Jewish Genealogy (IAJGS) has been extended through Wednesday May 6, 2015, to accommodate those enjoying Passover season.

The Preliminary Program is now posted at the IAJGS 2015 website under the “Program” tab. The schedule will become interactive after Passover. Highlights:

Knowles Jewish Genealogy Collection Has Over a Million Entries

Ketubah Circa 1860.
This is the ketubah (marriage contract) of Hannah and Hayyim from their marriage on Tuesday, April 6, 1886 (א׳ ניסן תרמ״ו) in the town of Brody. Image by Yoel Ben-Avraham on Flickr Creative Commons at https://www.flickr.com/photos/epublicist/1355967207/in/photolist-.

Looking for an online resource of Jewish family trees?

“The collection started from scratch just over seven years ago, with historical records gathered from FamilySearch’s collections. Now the vast majority of new contributions are coming from families and private archives worldwide. The free collection can be accessed at FamilySearch.org/family-trees.

According to FamilySearch, “The databases from the Knowles Collection are unlike other collections in that people are linked as families and the collection can be searched by name, giving researchers access to records of entire families. All records are sourced and show the people who donated the records so cousins can contact one another. New records are added continually, and the collection is growing by about 10,000 names per month from over 80 countries. Corrections are made as the need is found, and new links are added continually.”

The database was started by Todd Knowles, a Jewish genealogy expert at the Family History Library in Salt Lake City. Jewish communities from around the world have added to it: “The Knowles Collection has grown from Jews of the British Isles (now with 208,349 records), to Jews of North America (489,400), Jews of Europe (380,637), Jews of South America and the Caribbean (21,351), Jews of Africa, the Orient, and the Middle East (37,618), and the newest one, Jews of the Southern Pacific (21,518).” Keep up with the Knowles Jewish Collection at its blog.

A live event airing online on Thursday, February 26, at 7:00 pm Eastern Time (US) will feature the memories of children of Holocaust survivors. 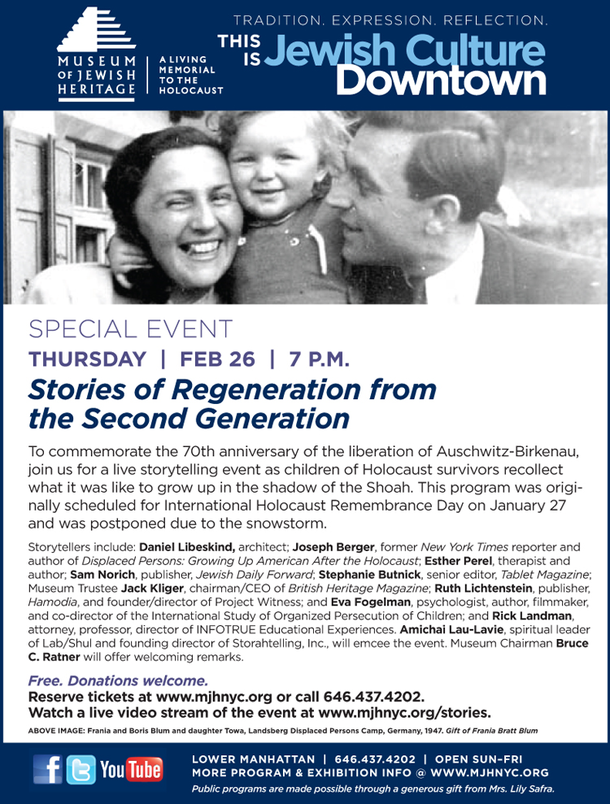 The Museum of Jewish Heritage will be live streaming a special program, Stories of Regeneration from the Second Generation. “This storytelling event, produced to commemorate the 70th Anniversary of the Liberation of Auschwitz-Birkenau, features notable 2Gs (children of survivors) and their extraordinary stories about growing up in the shadow of the Holocaust,” says a press release. “Through the live stream, the Museum of Jewish Heritage is delighted to enable limitless community participation in this incredibly moving, one-of-a-kind event.”

Can’t watch it live? The program will be archived on the Museum of Jewish Heritage’s YouTube channel.

This announcement came to us by way of JewishGen, an affiliate of the Museum of Jewish Heritage. Click here to visit JewishGen and learn more about searching for your Jewish family history.