Hard Drive v. Evernote for Genealogy: Which Should I Use? 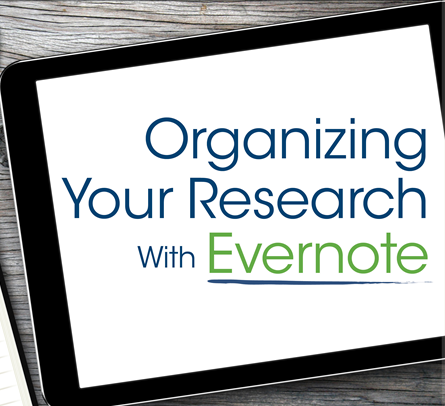 “I’m a fairly experienced general researcher but am just starting to get serious about genealogy. I plan to use Evernote. I have a number of scanned pictures on my hard drive and plan to establish surname structure as you recommended [in your Premium videos]. What is the relationship between what you keep on your hard drive and what is on Evernote? Is there a podcast on this or could you just reply with a few sentences that can guide me in my early setup? Or point me to some ideas?”

Barbara says she has already listened to my Premium videos on Hard Drive Organization (Parts 1 and 2) and Evernote, which are available on this website to Premium members. This is exactly where I would tell anyone else to start.

Here’s more advice for Barbara and other Evernote users: I use both Evernote and my hard drive, although the hard drive is mostly just for photos now since they are larger files that gobble up the allotted Evernote upload. Just about everything else just goes to Evernote. Evernote is quite a different animal from a hard drive, though both are storage facilities for our research. Evernote has such a powerful search engine that we don’t have to rely as much on “containers” such as folders like we do on our hard drive.

The reason for the detailed hard drive organizational system I recommend is so that we can find things quickly because our computers aren’t as powerful in that regard. And our computer doesn’t apply OCR to our images, which Evernote does making those notes so easily searchable. While there are notebooks in Evernote, I use them sparingly, mostly for projects and top-level categories of organization. Tags are the really defining element of Evernote notes, and I have lots of those.

Good question! Thanks for being a Premium member, Barbara! 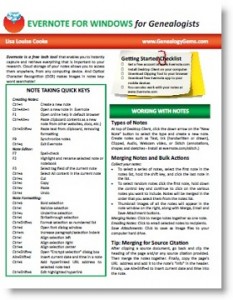 Evernote for Genealogists Quick Reference Guides for Mac and Windows, available as PDF downloads or (in the U.S.) as laminated guides.

“How to Organize Your Research with Evernote” Premium video for more specifics. (Not a Premium member yet? Click here to join.)