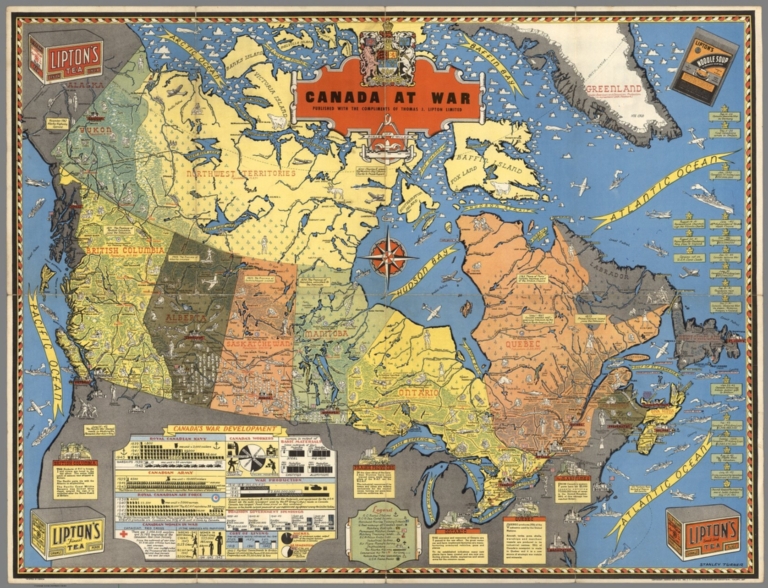 Canada at War by Stanley Turner, 1944. Online at the David Rumsey Map Collection. Click on image for full citation and to access image.

During World War II, millions of people anxiously followed the progress of battles and troop movements that affected their loved ones. Artists and map-makers stepped up to provide colorful, action-packed maps.

Toronto artist Stanley Turner was one of these. He created a series of maps between 1942 and 1945 that were printed and licensed as promotional giveaways to businesses in Canada and the U.S. Today you can find Turner’s maps digitized at the David Rumsey Map Collection.

Stanley wasn’t the only one making these beautiful maps. Read about Richard Eddes Harrison and the big changes in popular cartography during the war in my blog post, “World War II: A Revolution in Map-Making.”

Fast-forward 60 years in time, and the latest revolution in map-making and information-sharing is where? On Google Earth! Google Earth is packed with topography, but also shows us man-made features like roads and bridges, geographic boundaries, historical maps and photographs and so much more. These help us understand things like movements of our ancestors–whether they were troops in World War II or settlers in distant places.

Want to learn more about using Google Earth for genealogy (or the Google Earth Pro version that was just released FREE to the public)? Become a Genealogy Gems Premium member. You’ll have access to video classes like these:

Premium Membership is a bargain at only $29.95 for an entire year’s access, plus right now you get the free bonus ebook Lisa Louise Cooke’s 84 Best Tips, Tricks & Tools from Family Tree Magazine. Click here to learn more about Premium Membership.