The Touching Stories our Heirlooms Hold

Some of us are using heirloom research for genealogy. A new exhibit traces the history of interesting heirlooms using genealogical research strategies. Be inspired by these examples and tips to research heirlooms and more fully discover their stories. 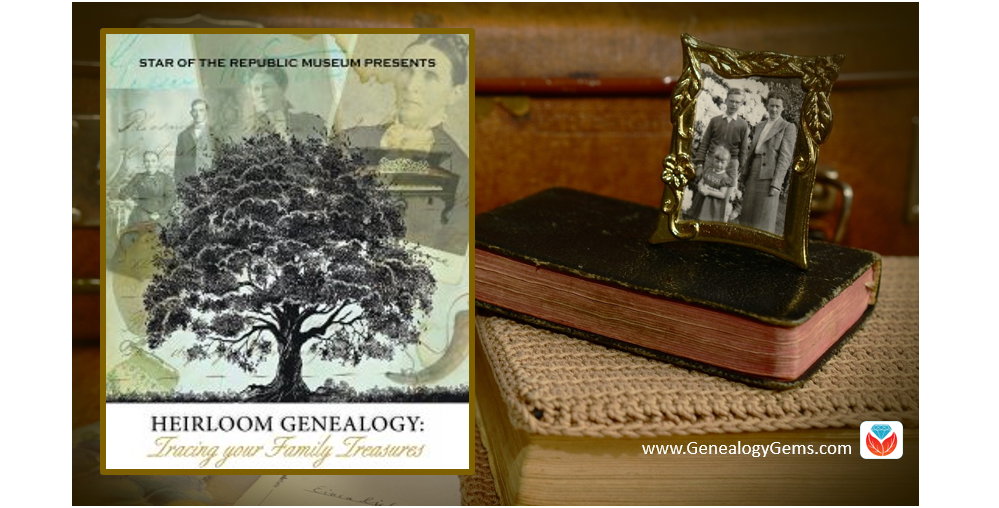 A new exhibit called Heirloom Genealogy: Tracing your Family Treasures has opened at The Star of the Republic Museum in Texas. You better believe it caught our interest! We know our readers are looking for unique and different ways to continue their genealogy journeys. We wanted to find out more about how family historians are using heirloom research for genealogy. Curator Shawn Carlson was kind enough to answer some questions about it and share the touching stories the heirlooms held.

Q: What an unusual exhibit idea! How did you think of it?

A: I had been researching artifacts at the museum for several years by tracing the genealogy of the families who donated the artifacts. The best exhibit text usually comes from real stories about artifacts—and doing the genealogy was where I found the stories. When I started thinking about this latest exhibit, I thought maybe there was a way that I could use the genealogical research I already had, and that’s when I came up with  the idea of “heirloom genealogy.”

Q: Who was involved in the research and how long did it take?

A: I did all of the research. Some of it had previously been done, but some was new. I usually spend the summer researching for an exhibit, and then write the text and begin production in the fall for a March opening during the Texas Independence Day celebration at Washington-on-the-Brazos.

Q: Can you share a couple of examples and images of artifacts and the documents that told their stories?

A: One of the artifacts I researched was a red-on-white appliqué quilt. It was made in 1805 in Vermont and donated by the quiltmaker’s 3X great-granddaughter who lived in Houston. It should have been easy to figure out the lineage by the inscription on the quilt—but it wasn’t. There were two Cynthia Tuckers and two Pearl Browns in the family and one quilt owner had been married a couple of times and used a nickname. So, it took a bit of sorting out. The research was all done using census data, but it all came back to the inscription on the quilt for final verification.

Another item in our collection is a small buckskin suit that belonged to a little boy named Edward Clark Boylan. He was born in New Orleans in 1840 and died three years later near Galveston, probably from yellow fever. We knew his birth and death dates from his sister’s descendant who donated the suit, but not much else. I found some cryptic notes in our files taken by a previous curator and was able to trace Edward to Captain James Boylan who was captain of the ship Brutus during the Texas Revolution.

I found a passenger list from 1839 with Captain Boylan, his wife, and daughter traveling from Puerto Rico to New York. Mrs. Boylan would have been pregnant with Edward during that voyage:

The year that Edward died, his father was mentioned frequently in the newspapers as he led a flotilla of ships out of Campeche. He was probably not present when little Edward died.

Q: What was an especially interesting story you came across while researching this exhibition?

A: One of the most interesting items we’ve received in recent years is a slave birth record that was part of a family collection:

The donor’s ancestors were early settlers of Washington County. The slave record was interesting because it listed birth dates from 1832 to 1865. Out of curiosity, I tried tracking some of the slaves to see if I could find living descendants. I started with the 1870 census—looking for African-Americans with the surname of the plantation owner and first names that matched the slaves in the birth record. I was able to follow through on one of the names to find a living descendant. She and her family came to visit the museum and see the birth record of their ancestor. While the family was visiting during last year’s Texas Independence Day celebration, the donor of the slave record also visited the museum and the two families were able to meet.

Q: What advice do you have for family historians with heirlooms?

A: Learn about the artifacts you have and match them to their owners. There is plenty of information online that will help you identify and date artifacts. Knowing the date of an artifact helps you determine who had it in the past.

More on Heirloom Research for Genealogy

Connect your heirlooms with their stories and bring the past to life!

Get Denise Levenick’s popular book How to Archive Family Keepsakes: Learn How to Preserve Family Photos, Memorabilia and Genealogy Records. This book will help you sort, identify, and preserve your own treasured family artifacts and memorabilia.