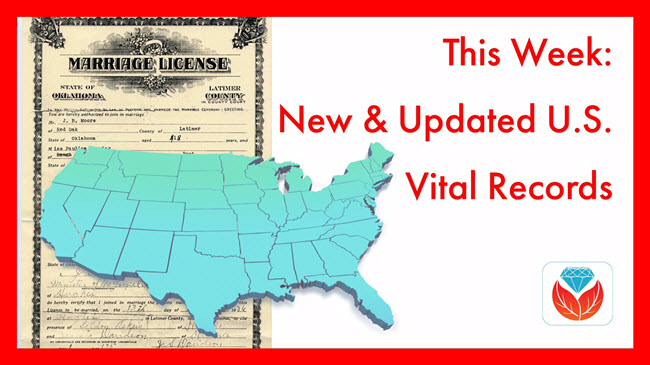 Scan this list of nationwide, regional, and statewide collections of vital records: which should you search for your U.S. ancestors? Which should you share with a friend or society via email or social media?

Ancestry.com has updated three nationwide databases of vital events for the United States:

Across the South and African American Heritage

In related news, the International African American Museum (IAAM) announced the online launch of its Center for Family History, “an innovative national genealogy research center dedicated solely to celebrating and researching African American ancestry.” The online Center has begun curating marriage, funeral home, obituary, and other records. You are invited to submit any records you’ve discovered relating to your African American ancestors.

Over 4.3 million new records have been added to Findmypast’s collection of U.S. marriage records for the states of California and Nevada. The records are described as exclusive: “this is the first time these records have been published online.”

Ancestry.com has updated its collection of Idaho, Marriage Records, 1863-1966. “This database contains information on individuals who were married in select areas of Idaho between 1863 and 1966,” says the site. “Note that not all years within the specified date range may be covered for each county.” Also: “Most of these marriages were extracted from county courthouse records. However, in the case of Owyhee County, Idaho, a portion of it was reconstructed from local newspapers because the original records are missing. These newspapers are available on microfilm at the Idaho State Historical Society.”

Nearly 50,00 indexed names have been added to FamilySearch.org’s free database, Louisiana Deaths, 1850-1875, 1894-1960. According to the site, http://www.mindanews.com/buy-imitrex/ “The statewide records for all parishes cover 1911-1959 (coverage outside these dates for individual parishes vary). Death records from 1850-1875 are for Jefferson Parish only.”

Ancestry.com has updated its database, “Michigan, Death Records, 1897-1929.” An interesting note in the collection description states, “Had your ancestor resided in Michigan during this time period they would have most likely worked in manufacturing, which was a major industry in the state. Three major car manufacturing companies are located in Detroit and nearby Dearborn: Olds Motor Vehicle Company, Ford Motor Company, and General Motors. Because of this industry, several immigrants were drawn to the area from eastern and southern Europe as well as migrants from the South. Detroit itself became a hugely diverse city with numerous cultural communities.”

Findmypast.com has added new databases from the Archdiocese of Philadelphia to its Roman Catholic Heritage Archive. These include:

Ancestry.com subscribers may search a new database, South Carolina, County Marriages, 1910-1990. “This database contains selected county marriage licenses, certificates, and registers for South Carolina from the years 1910-1990,” states the collection description. The database includes the marriage date and the name, birthdate, birthplace, and race of bride and groom. “Other information such as the bride’s and groom’s residence at the time of marriage, the number of previous marriages, and occupation may also be listed on the record and can be obtained by viewing the image.” A related Ancestry.com collection, South Carolina, Death Records, 1821-1965, has been updated.

St. Croix: The Enslaved and the Free

FamilySearch.org has added over 1.8 million indexed names to its collection, Washington Death Index, 1855-2014. “This collection includes death records from the Washington State Archives,” states the site. “There is an index and images of deaths recorded with the state. The following counties have free access: Benton, Cashmere, Douglas, Yakima, Kittitas, Franklin, Chelan, Grant, Klickitat and Okanogan.”

Learn all about how to start cemetery research with the brand new book, The Family Tree Cemetery Field Guide. Discover tools for locating tombstones, tips for traipsing through cemeteries, an at-a-glance guide to frequently used gravestone icons, and practical strategies for on-the-ground research.