Denmark Census Records are new at FamilySearch this week. Other new and updated genealogy records include new vital records for England, Catholic Parish records for Scotland, and various unique collections like WWII records for New Zealand, French Polynesian vital records, and military records and more for the United States. 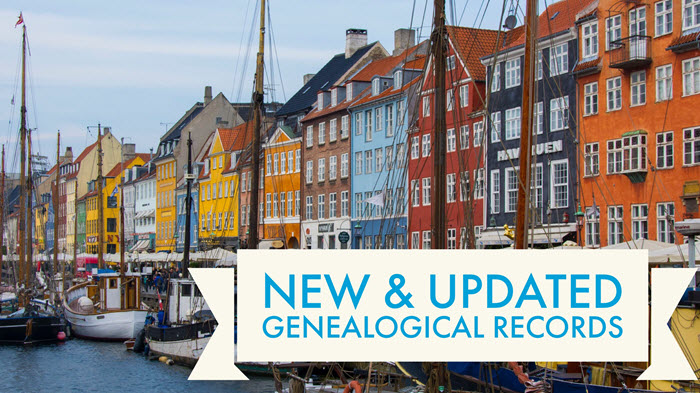 FamilySearch.org now has Denmark Census collections for the following years: 1860, 1870, 1880, 1890, 1901, & 1906. These indexes (provided by MyHeritage) are totally free to explore at FamilySearch, and the images were provided previously from the National Archives of Denmark.

New at Findmypast is an index of over 229,000 Lancashire Wills & Probate 1457-1858 records. This index of more than 229,000 records will give you details about the type of material available, the probate year, and your ancestor’s occupation and residence.

Also new from Findmypast this week are large records for Herefordshire. You can search indexes for Baptisms starting in the early 1500s, Marriages 1538-1936, Burials spanning four centuries, and Wills 1517-1700.

An extensive collection of browsable Scottish Roman Catholic Parish records is now available at Findmypast. It consists of all eight Scottish dioceses: Aberdeen, Argyll & The Isles, Dunkeld, Galloway, Glasgow, Motherwell, St Andrews & Edinburgh, and Paisley. Records begin as early as 1736 and continue until 1942.

The Auckland War Memorial Museum has made over 100,000 WWII records available free online. From a recent press release: “Of the 140,000 New Zealanders dispatched to serve overseas in WWII, 104,000 of them served with the 2NZEF. Auckland Museum is now making these WWII Army personnel records publicly accessible through Online Cenotaph.”

New this week at FamilySearch: Civil registration of births, marriages, and deaths for French Polynesia, 1843-1999. Original records are located with the Tribunal Civil, Papeete, Tahiti.

Japanese internment camps. Now available at FamilySearch.org: War Relocation Authority Centers, Final Accountability Rosters, 1942-1946. From the collection description: “Digital images of originals are held by the National Archives at College Park, Maryland. These rosters are alphabetical lists of evacuees housed in relocation centers from 1945-1946. This project was completed in cooperation with Densho: The Japanese American Legacy Project.”

Montana. A new Birth Index 1870-1986 is available at Ancestry.com. The Death Index 1907-2015 has also been updated.  These records come from the State of Montana Department of Public Health and Human Services. Copies of the actual certificates may be ordered from the Office of Vital Statistics.

Virginia. Also new at Ancestry.com are Virginia Vital Records, 1660-1923. Indexed information may include primary names and names of family members, as well as birth, marriage, death, and burial information. This collection was indexed by Ancestry World Archives Project contributors.

Be sure to share this post with your genealogy friends and groups so they can explore these wonderful new collections!