Researching African American roots has unique challenges. This Q&A with expert Angela Walton-Raji can inspire you with tips and success stories. Learn what to ask, what history you should know, how to face the 1870 “wall” and how to explore your ancestor’s freedom story.

Not long ago, genealogy expert Angela Walton-Raji joined me on the Genealogy Gems Podcast. She shared fantastic insights about tracing your African American roots, including why it can be challenging and how to overcome some of the brick walls you might encounter.

I’ve distilled our conversation down to some essential points here. Of course, I invite you to listen to the whole thing yourself in the free Genealogy Gems Podcast, episode 201.

To start with, I asked Angela what was unique about tracing your African American genealogy. She offered this important background: 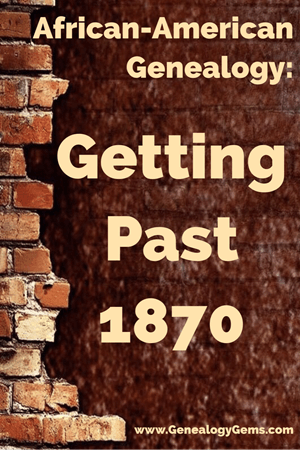 “The African American story is unique in and of itself. Of course we get into the standard records that everyone uses: the vital records and census records. But there are going to be some challenges once one gets into 19th century, particularly once one reaches what we call the “wall” of 1870. [On the previous census, about 90% of African Americans were enslaved and therefore they aren’t listed.] Often you’re not quite sure where to go next.”

Oral history: what to ask

When someone doesn’t appear in the mainstream record trail, you have to find another path. Sometimes, you can start down that path with living relatives. Here’s some advice from Angela about talking with your family:

“Oral history is really important. If you’re talking to an elder today who may be in their seventies, they were clearly born in the 20th century. They may be the last generation living who knew someone who had been born enslaved. So ask them: ‘Who was the oldest person that you remember when you were a child? And did that person ever talk about anyone who may have been enslaved?’ Find out whether they happened to know anyone when they were a child who had been born into slavery.”

“Also ask what they know about where the family was from: ‘Were we always from Georgia, or were we always from Pennsylvania, or was there a time when we came from another place?’ There are so many critical questions and also key points in the historical timeline that you want to zoom in on and ask elders. These are critical things to ask elders to sort of jar their memories and get them to start talking as well.”

I totally agree with Angela about the need to ask questions that get people remembering. Often when we sit down with someone for an interview, the first response may be, “Oh, I don’t know” or “I don’t remember.” But if you come prepared with a collection of really thoughtful yet pointed questions, you can help them access their memories. They may be amazed at just how much they really do remember.

The most compelling stories in our family histories are often to be found during moments of change and transition. And that’s certainly what the end of slavery was. Angela talks passionately about discovering your family’s freedom story:

“The war ended. Slavery ended. How did freedom come to your family? It was not the same for everyone. Don’t forget, a major war took place. Some had a male relative (or several) who enlisted in the Union Army. Some emancipated themselves. If there was a conflict nearby or if there was a Union raid coming through the town, this was an opportunity. Men, women, and children left and followed the line and became contraband. There were hundreds of contraband camps all around the South. Some volunteered; some became employees, nurses, matrons, and cooks. (Click on this Wikipedia Commons photo of a contraband camp to learn more about it.) 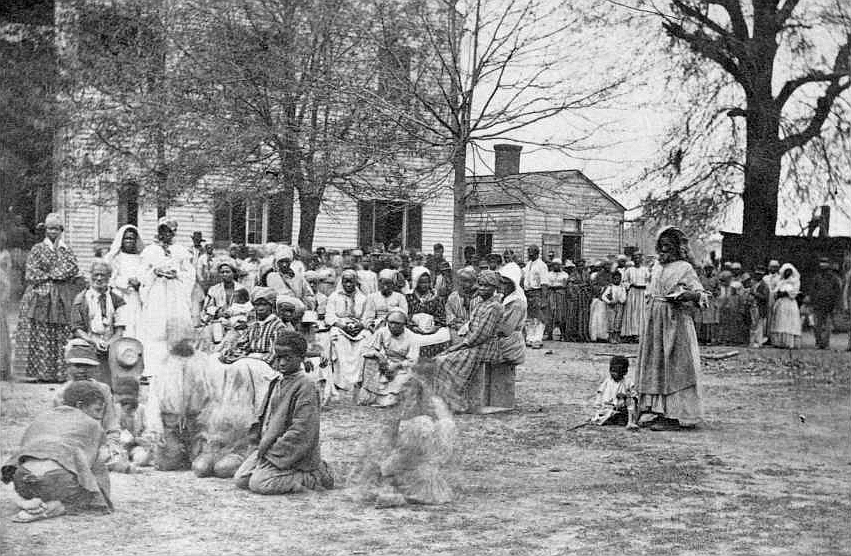 “And what’s amazing is there may be records. We know the Freedmen’s Bureau records are there, but there are a whole lot of other records also. The records of the U.S. Colored Troops contain a plethora of family data, particularly if the soldier upon his death left a widow, or children, or sometimes a mother (I’ve even seen fathers claim a pension for a deceased son).

“Again, sometimes the key is to learn the history—even the local history. Let’s take Memphis, Tennessee for example. Right now if you live outside of Memphis, there’s a big industrial park in a little area called President’s Island. Well, guess what? In the Civil War President’s Island became a contraband camp. There were three contraband camps close to Memphis, and these were individuals who had really freed themselves and then had started to settle and create little settlements during the war and into the late 1860s, and this became a community. And that’s a story right there.” [Angela actually shares her own family’s story at President’s Island in this blog post.]

Next steps: Finding your enslaved ancestors

After discovering that freedom story, a genealogist tracing African American roots will eventually reach the point in history when their ancestors were enslaved. Angela describes this as requiring an entirely new approach: “identify the last-known slaveholder, and then follow that person’s history—because within their history you often find your ancestors popping up, as well. It’s a challenge but it can be done.”

Angela goes deeper into this and other topics in her video class, African American Genealogy Research Essentials. This hour-long class covers barriers arising from the institution of slavery and how to overcome them with persistence and the right approach. You’ll learn essential resources for digging deep into your African-American family history, with an emphasis on those that can be found online. This video class was originally presented as a live webinar and includes her Q&A. Click on the image here to order that webinar.

Thanks to Angela for sharing these strategies with us here at Genealogy Gems—and thanks in advance to YOU for sharing this free article with others who will want to read it. You’re a gem! 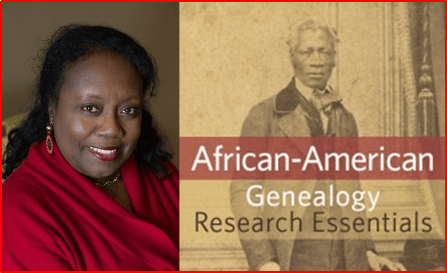