Genealogical records come in all shapes and sizes and this week’s records round up even includes round records! Keep reading because you never know what you’ll find.

I  love this website simply for the tag line Historic Photographs from the attic to the Web! We all have a bit of other families’ genealogy in our attics, closets and scrapbooks, and Indiana Album is a nonprofit organization that want to make it accessible. They encourage Hoosiers (and of course descendants of Hoosiers) to loan them their photos and documents. The group then digitizes, catalogs and shares them in a database on their website. Head here to search for the names, places and other keywords relating to your family. I’m finding gems like the one below. 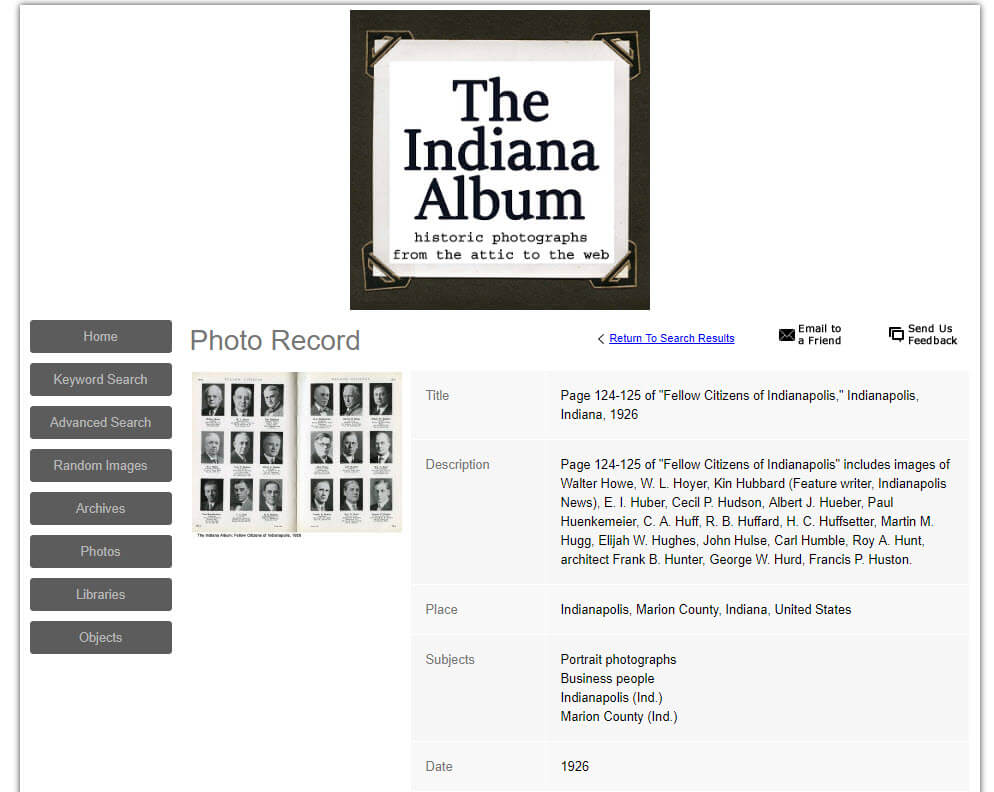 Here’s a free online collection that is adding tons of new melodic content!

I’m amazed how often I run across music references in my genealogical research, particularly when reviewing the diaries, letters and other records of my late 19th century and early 20th century relatives.

When I was in my twenties I wrote my Grandfather often and asked him questions like “Do you remember any favorite songs from when you were a young man?” His answer included:

As you can see from the linked titles above (click them to listen for yourself), I found every single one of them at the Internet Archive’s Great 78 Project. This is a phenomenal free online collection of digitized recordings made accessible to everyone.

The good news is that the project, which currently boasts over 200,000 recordings, just received funding to preserve another 250,000 sides of 78 rpm records. That means they need records. So, check your basement, closets and attic and consider donating your 78s to the Internet Archive’s Great 78 Project for digitization and physical preservation. You can donate your 78rpm Records to the Internet Archive’s Great 78 Project here.

There are over 6.4 million new records and newspaper articles available to search and explore this Findmypast Friday including over 264,000 new and exclusive parish records that have been digitised and made available online for the first time in association with the Lancashire Archives.

Over 31,000 additional records are now available to search amongst out collection of Lancashire Baptisms. The new additions cover the parishes of:

These records include both transcripts and images of the original documents. Each result will reveal when and where your ancestor’s baptism took place, the names of their parent’s and father’s occupation.

A further 179,000 records have also been added to our collection of Lancashire Banns & Marriages. These new marriage registers add coverage for a selection of new Liverpool parishes, including:

Learn when, where and to whom your ancestor was married, as well as the happy couple’s ages, occupations, marital status, residences, parent’s names and father’s occupation.

Over 54,000 new records from the central Liverpool Parish of St John. These new records span the years 1767 to 1883 and will allow you to discover when your Liverpool ancestors were laid to rest.

The transcripts and images within this collection will enable you to discover when your ancestor died, their occupation, the date and location of their burial, as well as their age at death.

A whopping 5.7 million new records are now available to search within our collection of United States Obituary Notices.

These records, obtained from the tributes.com and currentobituary.com websites will enable you to discover your ancestor’s name, birth and death years as well as the original obituary text. Additional information such as images and details about the records can be found on the source’s website.

Explore the records of investors in The Company of Scotland Trading to Africa and the Indies, also called the Scottish Darien Company. It was funded by investments from people across Scotland. These transcripts will provide you with information on those who invested money and their representatives.

The Darien scheme was an unsuccessful attempt by the Kingdom of Scotland to establish a colony called “Caledonia” in Panama in the late 1690s. Opposed by commercial interests from England, the company of Scotland raised subscriptions for the scheme in Amsterdam, Hamburg, and London. English investors soon raised their share but withdrew their money after King William and the English Parliament turned against the venture. However, by August 1696 the Scottish investors raised £400,000 themselves.

As the scheme was backed by approximately 20% of all the money circulating in the country at the time, its failure left the entire Lowlands in substantial financial ruin and was an important factor in weakening Scottish resistance to the Act of Union. In July 1699, the colony was abandoned due to inadequate provisions, the unfamiliar hot and humid climate had caused fever to spread, and many settlers died. Of the 1,200 settlers, only 300 survived.

To mark Icelandic National Day this week, we have made over 287,000 baptism and marriage records from the land of fire and ice available to search on Findmypast.

These two new indexes span the years 1730 to 1920 and will generate hints against your Findmypast Family tree.

A bumper crop of new and updated titles have been added to the collection this week, with 163,404 new pages added. We have seven brand new titles added this week, covering both England and Scotland. We have three new London publications joining us – the Harrow Midweek, the Middlesex Gazette and the Middlesex Independent – as well as one Scottish title (the Northern Ensign & Weekly Gazette) and one new Essex title (the Essex Guardian). We are also delighted to welcome two specialist sporting titles – namely, the Volunteer Record & Shooting News, which ‘warmly supports the interests of the shooting man,’ and the Fishing Gazette, a publication which covers all types of fishing across the world.

Further to these new arrivals, we have also updated sixteen of our existing titles. Updates this week cover the length and the breadth of the United Kingdom and Ireland, with updates incorporating publications from Aberdeen to Jersey, from Kingston to County Down, from Bristol to Kensington, from Crawley to Strabane.

Fold3 just announced “We have added a new collection of naval records to our archives! The Navy Officers’ Letters 1802-1884 is a collection of letters to the Secretary of the Navy from officers assigned to naval ships, stations, and Navy bureaus.

The letters contain routine personnel matters such as duty assignments, leave or furloughs, desertions, resignations, court-martials, and other administrative issues. The collection is organized by year and then alphabetically by sender. The letters offer a glimpse into military history and provide valuable genealogical records for ancestors that served in the Navy.”

This week the British Newspaper Archive added 137,896 new pages spanning 128 years from 1871 to 1999 to eighteen of their existing collections. These include extensive updates to the Walsall Observer, and South Staffordshire Chronicle, which cover the years 1873 to 1969 and includes nearly 35,000 pages.

Also updated: Six of their London titles, including the Acton Gazette, as well as three Scottish titles, with pages added to the Hamilton Advertiser, the Dumfries and Galloway Standard and the Aberdeen Press and Journal. We have added pages to publications covering Newcastle and Middlesbrough, as well as new pages to The People.

A subscription is required. Clicking on the titles above allows you to see examples and review the scope of the collection.

Full Disclosure: We appreciate when you use our links because if and when you subscribe we are compensated, which helps support this free blog and the free Genealogy Gems Podcast.