The Bombing of London in WWII: Check Out this Interactive Map of The Blitz

An interactive map lets you explore The Blitz: the intensive Bombing of London by the Germans in 1940-1941. 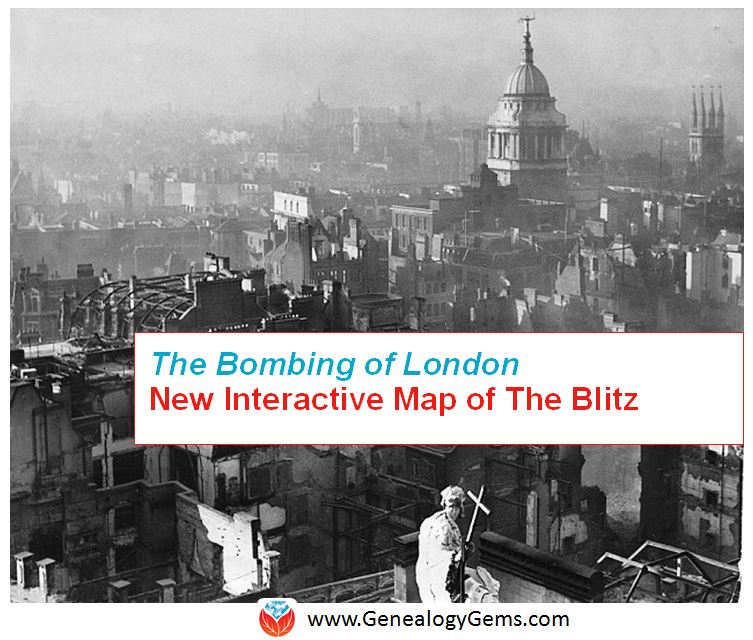 We see the images often in WWII-era movies. Londoners hunched in tube station tunnels during air raids. Children evacuating the city by the thousand. The Blitz was a period of intensive bombing of London by the Germans that began in September 1940 and continued through the following June. Now we can explore exactly where and when all those bombs fell at a new interactive website, Bomb Sight.

“With Bomb Sight you can discover what it was like in London, during WW2 Luftwaffe Blitz bombing raids, exploring maps, images and memories,” explains the site. “The Bomb Sight web map and mobile app reveal WW2 bomb census maps between 7/10/1940 and 06/06/1941, previously available only by viewing them in the Reading Room of The National Archives.”

As you can see from this screenshot, the site is map-based. All those red dots you see are bombings. (Can you imagine bombs falling that thickly in your own neighborhood?) Different icons reveal the type of bomb. Click on them to learn more about that event. You can even view historical images of that neighborhood and read stories and memories relating to that area. You can ask to map to show you only the first night of the blitz, a weekly look or an aggregate (all-inclusive) view, like the one shown here.

Though you can search visually, you can also enter a street or postcode to look at a specific area. Zoom in or out; explore different map layers for different types of information.

These maps were created from 559 map sheet originals that were declassified in 1971 but are very fragile today. So this site represents a fantastic new free resource that hasn’t been widely accessible to the public. It’s stunning to look closely at a neighborhood and see how densely the bombs fell. It’s also stunning to pan out to the widest view and see SO many dots. So many bombs. So much destruction.

Immerse Yourself in The Blitz: Everyone Brave is Forgiven

Everyone Brave is Forgiven by British novelist Chris Cleave  is a story about love and war during some of the longest sustained bombing campaigns of World War II. It immerses readers in the harrowing experiences of The Blitz, as civilians frantically piled their children onto trains headed for rural parts unknown, then spent the next several months running for underground shelters whenever the bombs came. You’ll read about children who gradually snuck back into the city, only to find themselves homeless and orphaned. You’ll careen along with female ambulance drivers who dodged explosions and ruins during air raids as they raced toward smoking ruins. But amidst all this devastation are stories of love, romantic and otherwise, and stories of bravery, amidst moments of fear and panic. This Genealogy Gems Book Club pick was an instant New York Times best-seller, and for good reason! Click here to pick up your e-book or print copy.

Was This My Ancestor’s Neighborhood? Using Google Earth for Genealogy

5 Ways to Enhance Your Genealogy Research with Old Maps (available to Premium website members). Below you can watch a free clip from this video on using Sanborn fire insurance maps (and yes, there are fire insurance maps for London: they date to 1792).

About Genealogy Gems Premium Website Membership
The video class you just caught a peek of is one of the perks of Genealogy Gems Premium membership. For one low annual fee, members can watch more than 2 dozen Premium member-only videos on genealogy research strategies, organization, technology tools (like Google, Google Earth, Evernote, Dropbox and cloud computing) and more. And we keep adding new videos regularly! Premium website members also have access to our monthly Premium podcast and all archived episodes. Click here to learn more!

Thanks for sharing this post with others who will want to learn more about the bombing of London during World War II. Just email the URL or post this article on your favorite social media channel.