BRITISH APPRENTICE RECORDS. FindMyPast subscribers can now Britain, Country Apprentices, 1710-1808. These nationwide registers for apprenticeships “recorded the tax paid for each indenture for an apprentice. The average apprenticeship was seven years.” Records may include an ancestor’s parent(s), his/her master and the profession chosen.

CROATIA CHURCH BOOKS. Nearly 3 million indexed records have been added to FamilySearch’s free collection of Croatia Church Books, 1516-1994. Browsable images are already online. According to the collection description, “Records of births and baptisms, marriages, deaths and burials peformed by priests in Croatia. Includes vital records of Jews. These records were acquired from the Croatian State Archive. Baptisms through 1900 can be searched.”

NORTH DAKOTA CENSUSES. Over 350,000 indexed records each for North Dakota censuses of 1915 and 1925 are now searchable for free at FamilySearch. Included in these records are names, titles, relations to heads of household, hold, race, residence and family number.

PENNSYLVANIA CIVIL WAR MUSTERS. Ancestry subscribers can now search Pennsylvania Civil War Muster Rolls, 1860-1869. Says Ancestry, “This collection includes muster out rolls, arranged by regiment and thereunder by company. They list the soldier’s name, age, rank, unit, regiment and company; the date, place, and person who mustered him in; the period of enlistment; and the name of the commanding officer. Other details can include where the soldier enlisted, whether he was drafted or was paid as a substitute, pay earned, money owed to the U.S. for clothing or missing equipment, promotions, capture by the enemy, illnesses, and bounty paid and owed. At the end of the musters, transfers, deaths, and deserters were often listed, typically with details about the circumstances (e.g., where and when transferred; cause, date, and location of deaths; dates and places of desertion, etc.).”

Here’s a tip: Always read the descriptions for online collections you are searching. The descriptions generally tell you the source of the records; which records are included/missing; what genealogical data you may find in them and tips for searching the dataset. Some websites also suggest related databases. This tip comes to you courtesy of The Genealogist’s Google Toolbox by Lisa Louise Cooke, freshly updated and completely revised for 2015! 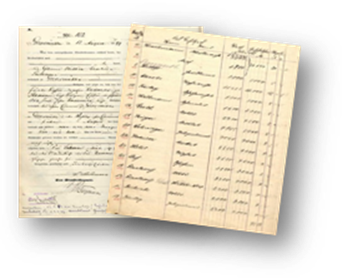 Records from Australia, England, the United States and Germany are among new content at Ancestry.com. Check out these collection highlights, now available online (access may depend on user subscription status).

Why Genealogists are Flocking to the London Metropolitan Archives

The London Metropolitan Archives says that half the inquiries they receive are from family historians. This is likely due to their rich resources (click here to peruse the collections)

Because there is such a strong genealogy interest in the LMA, they are making a huge effort to reach out to genealogists. They’re all about educating us and sharing what’s at LMA through their website, hands-on classes, remote research services and partnerships with data sites like Ancestry.co.uk and FindMyPast.co.uk. All this from a city archive!

Check out this video they’ve made for family history researchers:

Doesn’t that video make you want to check out the LMA for yourself? On their website, click on Family History. Read up on the basics, then click on Information Leaflet No.1 for a detailed description of their holdings. If you can’t visit, you can use their Family History Research Service. But it looks like a pretty tempting research destination!

Were Your Ancestors “Viscious” or in “Chronic Want”? London Poverty Maps Map It Out

There is a fantastic blog posting on Mad About Genealogy about the Booth Poverty Maps, which look like a riveting way to understand your ancestor’s 1880s London neighborhood.

According to blogger Linda Elliott,  “Booth employed a team of social investigators who walked around the London streets often in the company of the local policeman and recorded what they saw and heard. The notebooks that they filled out can be viewed online and make for fascinating reading with amongst other findings they record what the policeman thought of each street and sometime each building and its inhabitants.”

I’ve shown the map key here (right), clipped from The Charles Booth Online Archive. Linda describes each category in greater detail in her blog post, along with everything a genealogist needs to know to use the maps.