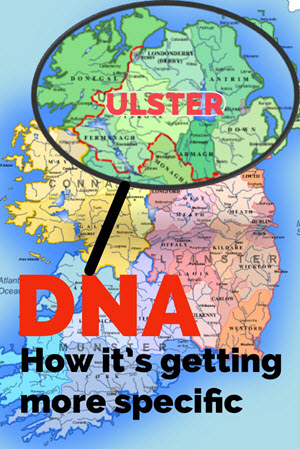 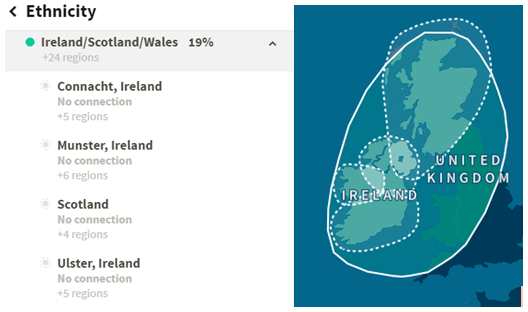 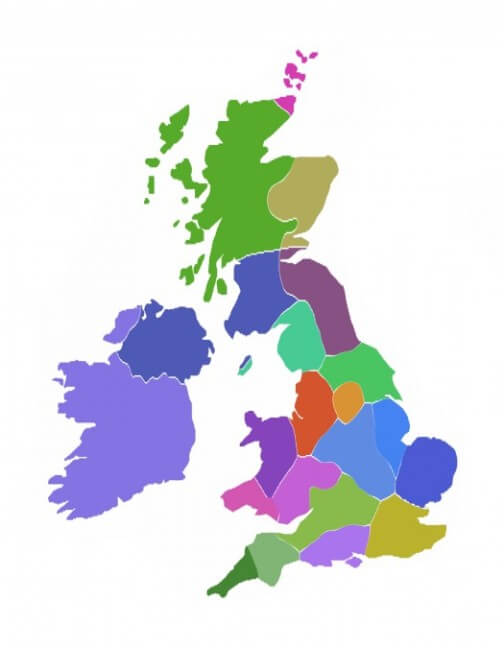 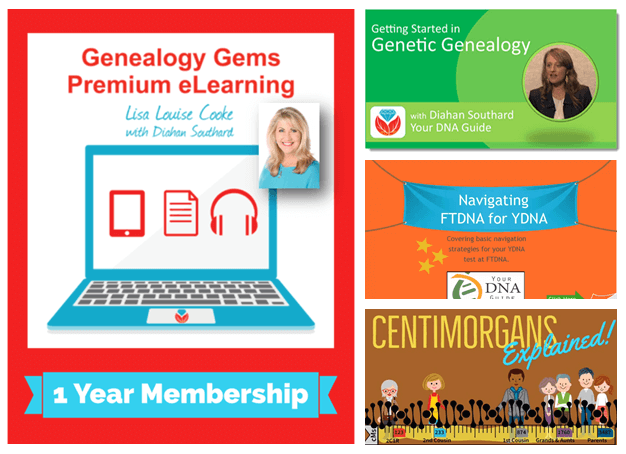 The Family Tree DNA ethnicity report has been updated, and this means more details about ethnic and geographic origins for both autosomal and mtDNA DNA testers. 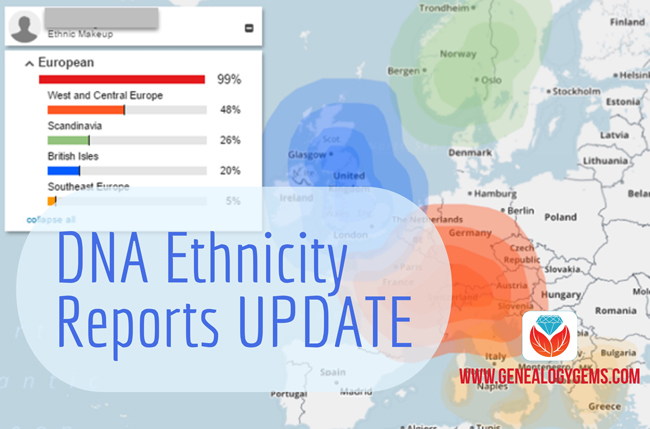 Family Tree DNA recently announced a round of updates to myOrigins, its mapping tool for ethnic and geographic ancestry. New are more detailed breakdowns of their population clusters and in-depth descriptions of them. (Visit Family Tree DNA’s website here.)

It is so exciting to see new or updated reports from our genetic genealogy testing companies! It is a good reminder of two things: First, that the results we currently have, especially in the arena of our ethnicity results, will continually be improving. Second, that once you test with any company, these improvements are added to your account and your results are updated automatically.

Family Tree DNA is the only company offering a complete look at your mitochondrial DNA (mtDNA), the one that traces your direct maternal line. They recently updated the deep ancestral assignments for these mtDNA tests. The updates were based on scientific advances in the world of mtDNA and can sometimes give you a more specific idea of where your ancestral line came from.

In addition to the mtDNA updates, FTDNA has also updated their MyOrigins results as part of your autosomal DNA test. Previously your MyOrigins results broke up the world into 18 different pieces and you were told your affiliation with each. Now with 6 new populations added, there are a total of 24. The changes include splitting three categories into smaller parts, like they are now reporting Finland separate from Siberia, as well as adding three new categories in South America, West Middle East, and Oceania.

Your MyOrigins results will now also include trace amounts, which are those percentages that are very low and therefore do not carry a high confidence. But many genetic genealogists wanted to see any area that may have been detected, and so FTDNA responded.

How to Review Your Family Tree DNA Ethnicity Report

2. On the myOrigins page, click View all to see your full ethnic percentages, as defined by Family Tree DNA. You can also click View myOrigins map to see your results mapped out. (The map looks like the one at the beginning of this post.) 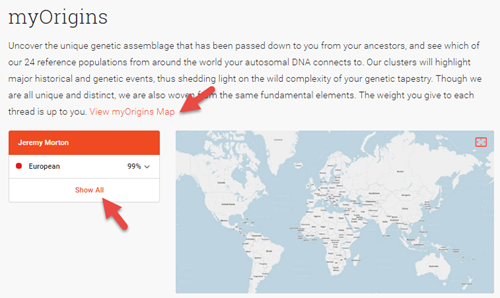 3. When you click to view all your ethnicity results, you’ll see a more detailed breakdown of your population groups. Click View all population descriptions to read more about each one. 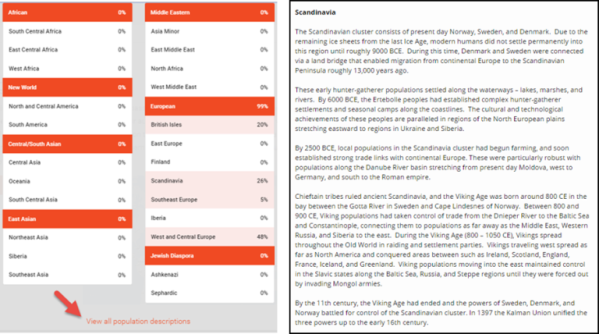 On the whole, are these updated results going to significantly impact your family history research if you have tested at Family Tree DNA? Likely not. The greater impact is just in the idea that these things can be improved, updated, and changed, which means our experience will continue to improve, and more people are likely to test. More people in the database means more possible cousins. More possible cousins means more genealogy breakthroughs, and a more complete picture of our heritage, and that is what we are really all after.

Click here to see individual guides for topics I talked about above, such as testing at Family Tree DNA, testing your autosomal or mitochondrial DNA and getting started (in which I explain ethnicity results). Or click here for the ultimate Genetic Genealogy Jumbo Pack: ALL 10 of my guides PLUS my video class, “Getting Started with Genetic Genealogy.” 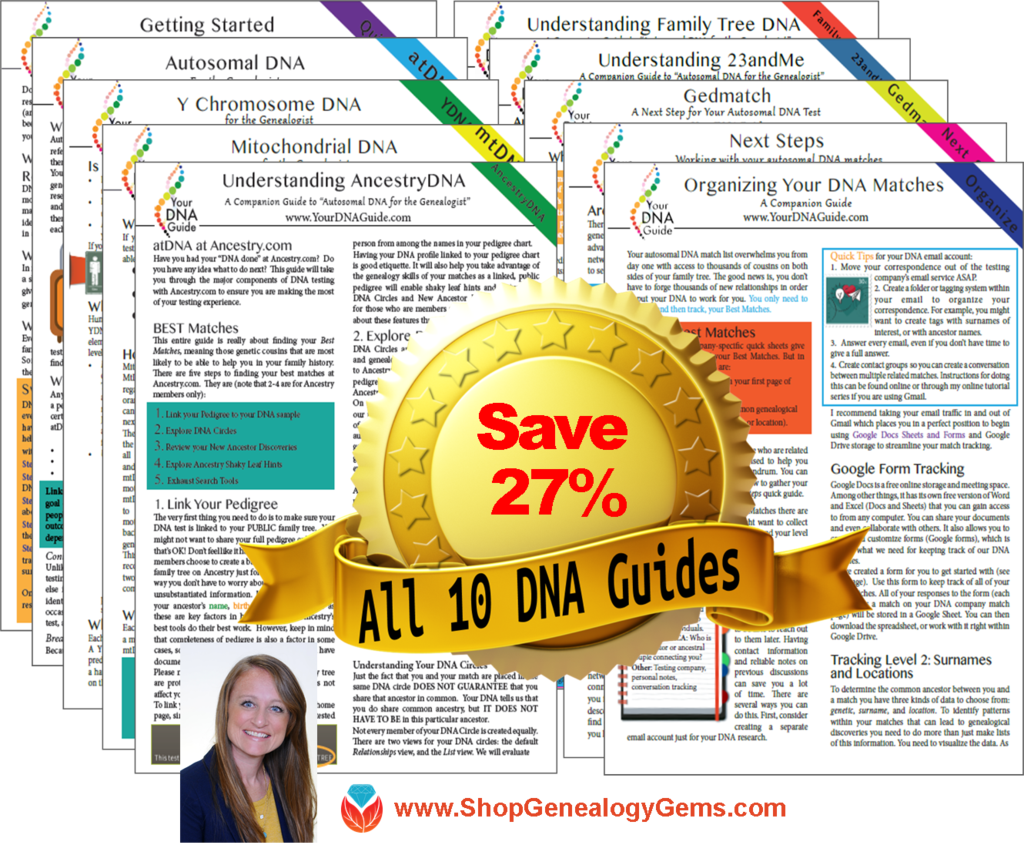