Europeana is a digital doorway to European cultural heritage that everyone with European roots will find interesting and enlightening.

Funded by the European Commission and Ministries of Culture in 21 member states, the Europeana website is home to nearly: 19 million images; 13 million texts (including books, archival papers and newspapers); half a million each sound and video files and 16,000 3-D models of objects.

A major part of Europeana is its World War I digital archive. As the site describes, Europeana “has been running World War I family history roadshows around Europe, helping to digitize people’s stories, documents and memorabilia from 1914-1918. People can upload their own digitized items onto the Europeana1914-1918.eu site. In 2014, the centenary of WWI, 100,000 images and scans have already come into Europeana, creating a virtual memory bank that reflects all perspectives on the conflict.”

Europeana 1989 and the Fall of the Iron Curtain

A sister site, Europeana 1989, collects “stories, pictures, films relating to the events of 1989 in Central and Eastern Europe.” You can upload your own materials or, as the site says, “let us take you on a journey through the Fall of the Iron Curtain, see it from all sides and draw your own conclusions.”

The top countries to supply images to Europeana are Germany, France and the Netherlands, each with more than 3.5 million items, and then Spain, Sweden, Italy and the U.K. The site attracted 4 million unique visitors last year. Click here to read a guide to using Europeana for genealogy and local history research.

Historical newspapers are another great source for genealogical and historical research. Europeana now includes the Europeana Newspapers collection which features hundreds of newspaper titles and millions of newspaper pages, spanning four centuries and 20 countries from across Europe. In addition to viewing digitized newspaper pages, many now support readable text files. These files allow you to keyword search within their contents. You can zero in on these files by using feature called ‘Search for records with full text’.

It’s worth investing a few minutes in reviewing the historical newspapers guides at Europeana In order to get the most from the collection. The helpful guides explain how to navigate, search, find, and reuse Newspapers content.

Other Europeana links to try: 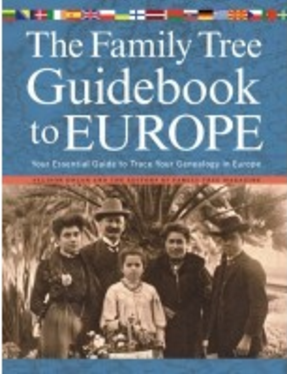