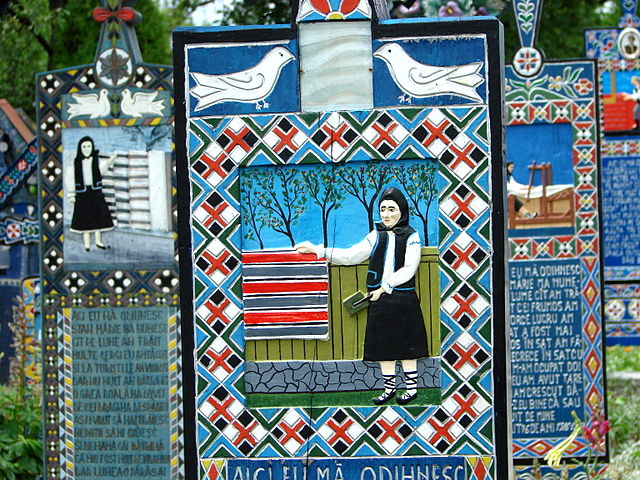 A gravestone creator in a small town in Romania took his mission seriously to memorialize the dead. But he did in, er, “living color,” so to speak. With plenty of colorful images and even dirty little secrets and gossip carved onto tombstones of the local residents at the “Merry Cemetery.”

As reported in the New York Daily News,  the woodcarver responsible for over 1000 gravestones in the “Merry Cemetery” would wander through town, taking notes on people’s quirks and secrets. Some flaws–drinking and carousing among them–are memorialized colorfully on their tombstones. On other stones, you’ll find his sad laments for the untimely passing of a child or the death of an adult by  a sad accident.

“There’s no point in hiding secrets in this small town in Maramures, so people’s lives are captured honestly in their epitaphs,” reports the article.

The woodcarver was Stan Ion Patras, who lived from 1908-1977. Conscious of the legacy he was leaving–and perhaps anxious to tell his own story rather than have someone else do it–Patras carved his own tombstone before he passed away. He trained his replacement, who continues to add to the brightly colored crosses.

Here’s another detail I thought was neat: Patras’ folk art was highly symbolic. According to a New York Times article on the cemetery, “The portrait of the deceased is central, surrounded by geometric designs in symbolic colors: yellow for fertility, red for passion, green for life, black for untimely death. The color scheme is keyed to the subject’s life — if, for example, the deceased had many children, yellow carries the design. Some crosses are crowned with white doves representing the soul; a black bird implies a tragic or suspicious end. The background is always blue, the color of hope and freedom.”