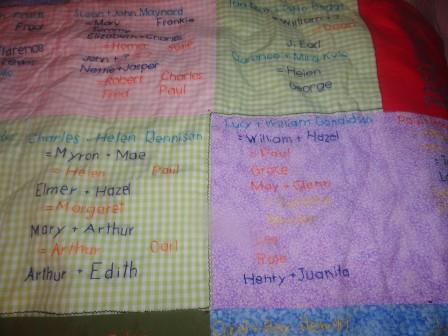 Not long ago, I came across this article from a local news outlet about the White family celebrating its 104th reunion. That’s quite an accomplishment, but what really caught my eye was the heirloom on display: a family tree quilt so large it couldn’t easily fit in a single photograph.

I tracked down the designer and creator of the family tree quilt. She’s a busy young mom named Jennifer Reiter. “Before we had our 100th reunion, I was reading a book with my girls about pioneer days,” she says. “A little girl was traveling. When they arrived at their destination, they made a quilt with all the memories from their favorite dress material. I got a crazy idea to do something like that for our family’s 100th-anniversary reunion: a quilt with everyone’s names on it.” 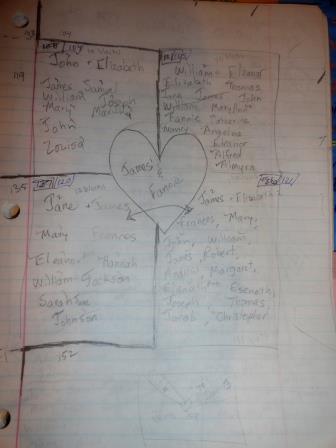 It wasn’t an easy undertaking. Jennifer took the names from a family history book her mother-in-law had. The founding couple from the 1700s had four children. Jennifer designed the quilt such that each quadrant of the quilt would represent one branch of the family. She sketched out her design across 46 pages from a notebook. Then she copied everyone’s names onto quilt block templates that were sent each out to volunteers in the family to help hand-stitch. 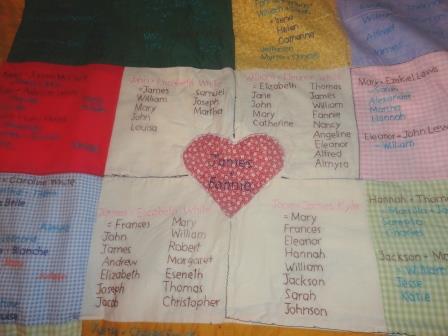 All the descendants’ names are on the quilt, Jennifer reports. “Each family unit appeared on one square. If a child got married and had a family, they got another square of their own. Each generation was a different color thread. My color is orange, so I can easily see who else is from the same generation I am. I tried to keep the colors of the fabric about the same, family-wise, too.”

“It took a year,” Jennifer says. “I didn’t get quite as much help as I 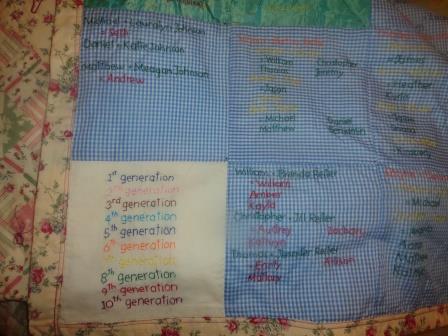 thought I would.” The final quilt documents 9 generations with 2601 names in it on a quilt that’s larger than king-sized. There are 256 quilt blocks, each of them 6″ square.

The quilt made its debut appearance at the 100th White family reunion, and a few years since then. It also took an honorable mention in the county fair. But she learned a lesson about letting it out of her sight too often: “There were a few years it was missing after it got left at the reunion. Someone went to the camp and they were looking for it again. The secretary had it. Now I have it my possession permanently.”

What an amazing accomplishment–and what an heirloom for the White family! Thanks for sharing it with us, Jennifer. 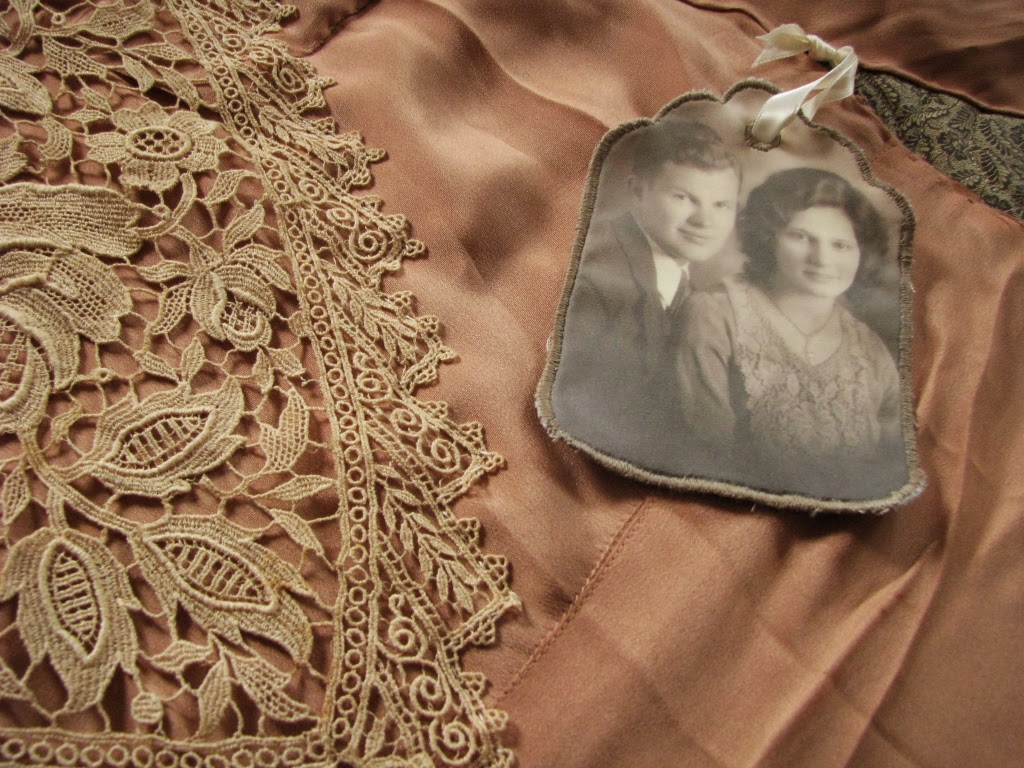 A New Heritage Quilt from Old Family Fabrics (with an entire wedding dress sewn into it!)

See the Incredible Piece of History This Auctioneer Stumbled Into

HMS Alert in pack ice during the Arctic Expedition of 1875. Wikimedia Commons image; click to see image and full citation.

Every man-made object has a story behind it–and sometimes an entire chapter in history. One such object is a bottle of ale recently discovered in a garage in Shropshire, England. As reported by TheBlaze.com, a British auctioneer found the bottle. “It looked interesting, so I took a closer look — and, lo and behold, there on the cap were the words ‘Allsopp’s Arctic Ale,’ then embossed on the seal was ‘Arctic Expedition 1875.’”

Now the bottle is up for auction! Here’s the description from the auction site:

“An unopened bottle of Arctic Expedition beer dated 1875, with original intact label and contents. Allsopp’s Arctic Ale was brewed for The British Arctic Expedition of 1875. The Expedition was an attempt by the British Admiralty to reach the North Pole and included two ships HMS Alert and HMS Discovery under the leadership of Vice-Admiral Sir George Nares (1831-1915). Unfortunately the expedition failed to reach the pole but succeeded in mapping the coast lines of Greenland and Ellesmere Island.”

I wondered whether anyone else has sampled another bottle of ’75 Arctic brew. So I googled it. I found a beer blogger who loves the stuff! From Martyn Cornell’s Zythophile: Beer Now and Then blog post of June 10, 2012:

“One indisputably legendary beer is Allsopp’s Arctic Ale, the powerful, rich Burton Ale, original gravity 1130, north of 11 per cent alcohol, brewed in Victorian times….There are a very few bottles left of the Arctic Ale brewed for the expedition under Sir George Nares which set out in 1875 to reach the North Pole. And this week I drank some….

Amazingly, there was still a touch of Burtonian sulphur in the nose, together with a spectrum of flavours that encompassed pears, figs, liquorice, charred raisins, stewed plums, mint, a hint of tobacco, and a memory of cherries. It was dark, powerful and still sweet….Those frozen sailors on the 1875 British Arctic Expedition, some of whom set a new record for furthest north, traveling to within 460 miles of the North Pole, must have cheered whenever another bottle was thawed out and decanted into their mugs.”

What history do your family artifacts hold? Click here to read about other family heirlooms, lost and found, trashed or treasured, reported here on our blog, like a post about a Purple Heart medal like the one shown here.