How to Find U.S. Merchant Marine Records for Genealogy

If one of your ancestors served in the United States Merchant Marine, then you’ll be especially interested in the conversation that our recent blog post on the topic of the Merchant Marine has generated about the records that may be available for your genealogy research. 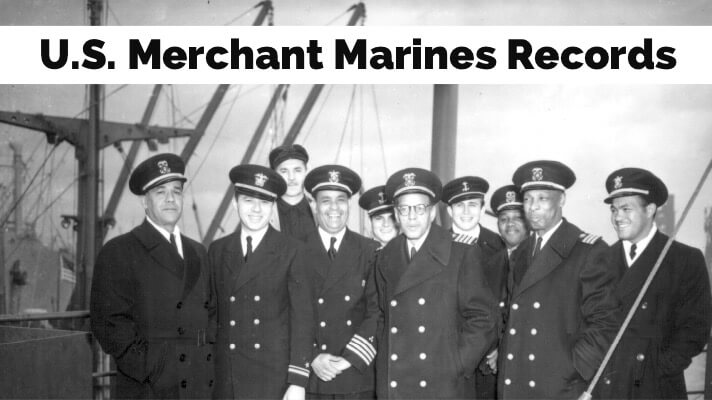 The article was on how to find military service records. Military Minutes contributor Michael Strauss made this comment about the United States Merchant Marine:

“Although not officially a branch of the military, the Merchant Marines sacrificed and lost lives since the days of the Revolutionary War, carrying out their missions of supply and logistics during times of war.”

A reader named Steve endorsed that brief remark in the article’s comments section, and expressed a desire to hear more on the Merchant Marine. He says:

“Although not considered to be a military arm of the United States, the Merchant Marines were an integral part of the war efforts in WWI and WWII and should be considered in genealogy. Many lives were lost in service of USA.”

In a beautiful expression of genealogy serendipity, a Genealogy Gems Premium Podcast listener has written in with a specific question about researching relatives in the Merchant Marine. Vicki writes:

“I have a distant relative who was a Merchant Marine during WWII. Raymond Ralph Burkholder was a Merchant Marine Able Seaman killed when his ship the Standard Oil tanker W. L. Steed was torpedoed by a German sub off New Jersey Feb. 2, 1942. Following is a newspaper article about the incident:” 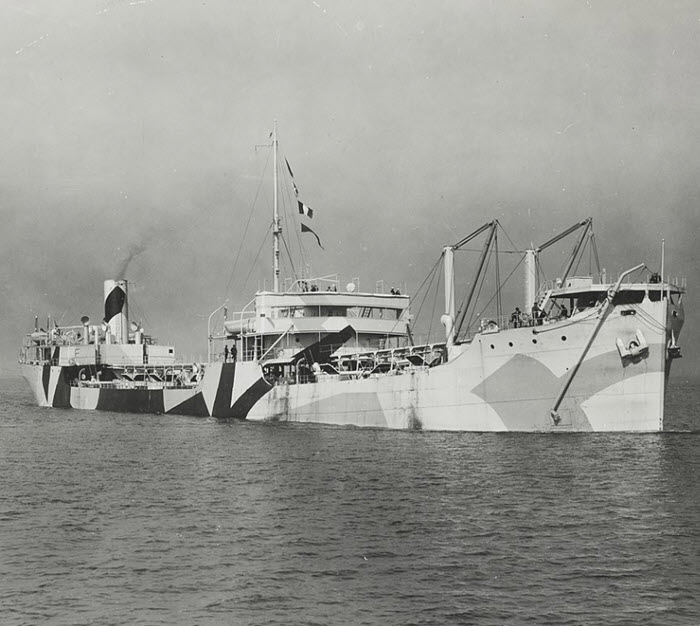 New York, Today – (AP) The toll of ships officially announced as sunk or attacked off the United States and Canada thus far in the war stood today at 25, after the navy reported the 6,182-ton Standard Oil tanker W. L. Steed was sent to the bottom by an enemy submarine off New Jersey Feb. 2.

The announcement of the W. L. Steed’s fate was made yesterday with the arrival of three survivors, who had been picked up semi-conscious after drifting for two icy days in an open boat. No word has come from the remainder of the crew of 38 as three of the tanker’s four lifeboats still are missing.

A Williamsport, Pa., man was listed as a member of the crew. He is Raymond R. Burkholder, able seaman.

Able-bodied seaman Louis Bartz, 38, of Philadelphia, and Ralph Mazzucco, 23, and Joaquim R. Vrea, 39, both of New York, said the submarine torpedoed the tanker at 12:45 p. m. and that after the crew got off in lifeboats the enemy craft fired 17 shells into the sinking ship.

Last night the third naval district reported that a South American steamship sighted a lifeboat containing a number of bodies off the Atlantic coast yesterday, but was forced to flee when a submarine popped up in the vicinity.”

Vicki’s question is this: Where do you think I would look for a death certificate? New Jersey?

Before we jump into answering that questions, let’s learn more about Merchant Marines so we better understand where to search.

About the U.S. Merchant Marines

The Merchant Marine actually served in a military capacity before the U.S. Navy OR the Coast Guard ever existed.

According to the website, American Merchant Marine at War, the Merchant Marine can trace its history to 1775, when “a party of Maine mariners, armed with pitchforks and axes, inspired by the news of the recent victory at Lexington, Massachusetts, used an unarmed lumber schooner to surprise and capture a fully armed British warship, HMS Margaretta, off the coast of Machias, Maine. The men used the captured guns and ammunition from the ship to bring in additional British ships as prizes. American privateers soon disrupted British shipping all along the Atlantic coast.”

The Revenue Cutter Service, the forerunner of the Coast Guard, wasn’t founded until 15 years later, in 1790, to prevent smuggling. 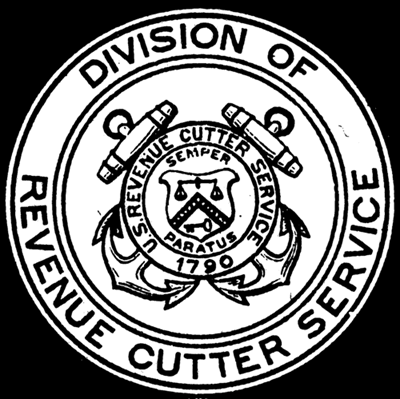 Seal of the U S Revenue Cutter Service

There was a Continental Navy in 1775, but it ended with the Revolutionary War. The US Navy didn’t come into being until 1797.

The Merchant Marine, as an umbrella term, refers to a body of civilian mariners and government-owned merchant vessels: those who typically run commercial shipping in and out of the country. During wartime, merchant mariners can be called on by the Navy for military transport.

And that’s what happened during World War II. Our Military Minutes contributor, Michael Strauss, says that “On February 28, 1942 President Franklin D. Roosevelt authorized the transfer (Under Executive Order #9083) of all maritime agencies to the United States Coast Guard. This order was a redistribution of maritime functions and included the United States Merchant Marine.”

Where to Look First for Merchant Marine Information

According to the American Merchant Marine at War website, over 1500 merchant ships were sunk during the War, and hundreds of others were damaged by enemy attacks and mines. That brings us to Vicki’s question about her relative.

As I discuss in my Premium eLearning video class Google Books: The Tool I Use Every Day, Google Books is a treasure trove of genealogical information. 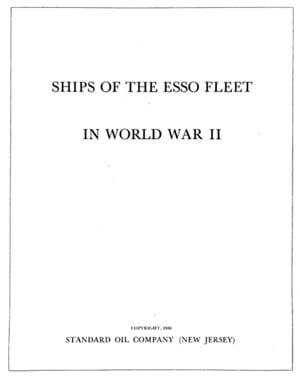 This book is an invaluable resource that actually provides a detailed, eyewitness account of Raymond Ralph Burkholder’s final acts on the ship before having to abandon it. It even details his last torturous hours in the lifeboat before he became delirious and died, only hours before the other survivors were rescued! 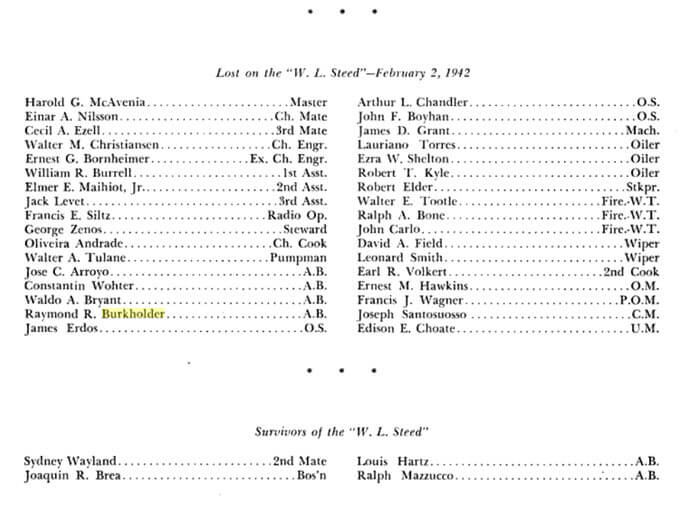 Here’s where I put my head together with Michael. I suggested checking the death certificates of the county of his last residence, which may now be held at the state level. He liked that idea and said it’s worth the effort.

He said that instead, he would go directly to the Records of the Merchant Marines. Michael writes that these records during World War II “can be somewhat confusing, but not impossible to search. The records for your sailor during the war can be located at several different locations.”

Even if you don’t have relatives who served in the Merchant Marine, keep reading because you may get some ideas about records to discover for other family members who may have served in the military in other capacities.

6 Places to Look for Merchant Marine Records for WWII:

Where can you find Merchant Marine records for World War II? Here are six excellent places to look.

Official Military Personnel Files (known as OMPFs) are maintained by the National Personnel Record Center in St. Louis, MO. Since these records are considered Archival 62 years after the date of separation, these are open for Merchant Mariners and others who served during World War II who were discharged by the end of the war. Click here to learn more about ordering OMPFs.

“You can also access the files by mailing in (Standard Form #180, downloadable here), and fill in the information requested about your Mariner. Note that the service record is likely to be under the heading of the United States Coast Guard when filling out the form—check that box. Don’t send any money; the Archives will notify you if the file is located.”

If your Merchant Mariner was killed during World War II, request the Individual Deceased Personnel File (IDPF). This file is separate from the OMPF file and is also at the National Personnel Record Center.

Michael says, “These files are a wealth of genealogical information about veterans who died during World War II and other war periods. Contact the Archives to request this file. If the file is not in their custody, it is possible it is still in the hands of the Army Human Resource Command located at Ft. Knox, KY. The Archives will let you know the exact location.”

The National Maritime Center website has links to records, forms, and general info. Request records with this downloadable form.

You will find Merchant Mariners collections at the National Archives cataloged under the records of the United States Coast Guard, Record Group 26.

This collection has 8 boxes of material containing details on Merchant Mariners killed, wounded, and those missing in action as a result of combat during World War II. Other records pertain to medals and other citations, court martials, and miscellaneous records.

If you know the name of the vessel that the Merchant Mariner served on, then try a search for the logbooks.

Logs can name assignments for crew members, among other log entries of the day to day activities of the ship. The National Archives website has finding aids for log books.

United States Merchant Marine applications for the licensing of Officers, 1914-1949 is available on Ancestry.com. This collection covers both World Wars. These document applicants who applied to be commissioned officers with the Merchant Marines, including men designated as Masters, Pilots, Engineers, or Vessel Operators.

During my research of the U.S. Merchant Marine for this article, I came across the phrase, “crossing the bar.” You may have heard this yourself. It refers to the death of a mariner.

The history behind this phrase:  a sandbar can be found at the entrance of many rivers and bays, and crossing the bar has come to mean leaving the safety of a harbor for the unknown.

I wish all of you in search of your ancestors who crossed the bar good fortune in your genealogical pursuit.