New and updated genealogical collections for the Royal Irish Constabulary are just the tip of the iceberg this week. Scroll down for more cool finds for New South Wales, Scotland, U.S. marriages, and an update to the Freedmen’s Bureau collections at FamilySearch.

You can now search the Ireland, Royal Irish Constabulary Service Records 1816-1922 at Findmypast for over 486,000 records that uncover the details of your ancestor’s career with the R.I.C. 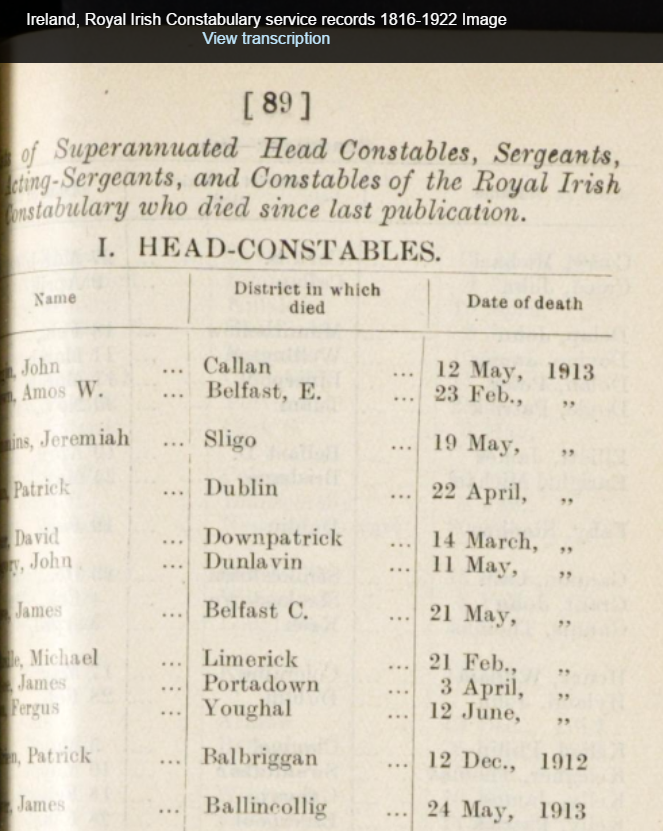 Clerical staff: record of service and salaries: These lists of clerical staff include birth date, age at appointment, rank, department and salary.

Constabulary Force Funds: These correspondence registers are of members who paid into the fund with notes on whether they had been pensioned, died or received any rewards from the fund.

Constabulary lists: These are lists of chief constables created during the first year of the Royal Irish Constabulary.

Disbandment registers: These registers are of serving members who were with the force in 1922 when it disbanded after the creation of the Free Irish State. They also noted the number of years the constable served and their recommended pension.

General registers: Records of constables’ service history are contained in these general registers. The entries include the individual’s birth date, native county, religion, previous occupation, date of appointment, and promotions, as well as any rewards or punishments received and the date of pension or discharge.

Officers’ registers: These registers are lists of Officers that include transfers and dates, favorable and unfavorable records, dates of promotions and details of previous military service.

Pensions and gratuities: Pension records reveal the constable’s rate of pay and the amount of pension calculated.

Recruits index: Lists of new recruits, their dates of appointment and arrival, and their company can be found in the recruits index.

Also at Findmypast, Ireland, Royal Irish Constabulary History & Directories has had a significant addition of over 43,000 records. You will be able to explore a variety of publications between the years of 1840 and 1921. These records will provide insight into the administration and daily operations of the police force.

At FamilySearch, the Ireland, Valuation Office Books, 1831-1856 are now available to search. These records are the original notebooks that were used when the property valuations were conducted between the years of 1831-1856. They are arranged by county, then alphabetically by parish or townland. 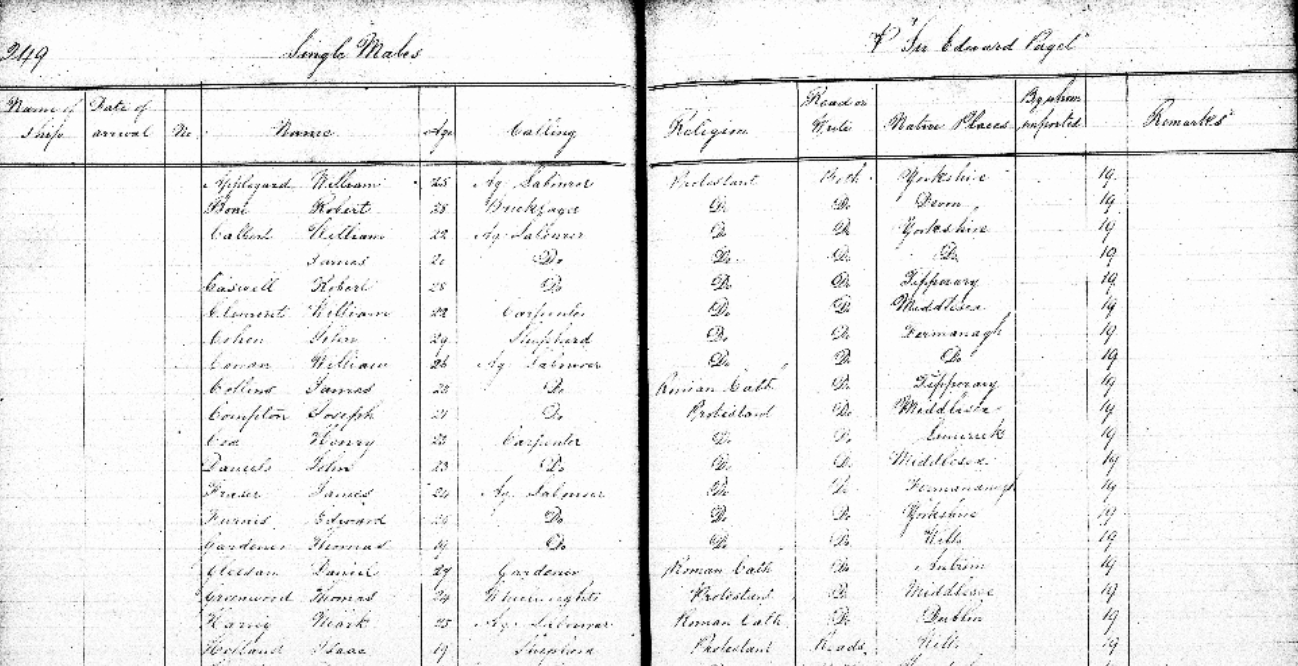 Each result will provide a transcript and image of the original record. The information included on the transcript will vary depending on whether your ancestor was an assisted or unassisted passenger, although most will include your ancestors name, passage type, birth year, nationality, departure port, arrival port and the dates of their travels.

The Scotland Non-Old Parish Registers Vital Records 1647-1875 found at Findmypast is a collection of registers created by churches outside of the established church. It contains over 12,000 transcripts of births, marriages, and deaths.

Though these are only transcripts and do not include a digital image of the original, you may find the following information on the records included in this collection:

With each result you will be provided with a transcript of the details found in the original source material. The detail in each transcript can vary depending on the event type and the amount of information that was recorded at the time of the event. Here are some of the facts you may find in the records:

FamilySearch has updated their magnificent collection of United States Freedmen’s Bureau, Records of Freedmen, 1865-1872. Records found in this collection include census returns, registers, and lists of freedmen. They also include letters and endorsements, account books, applications for rations, and much more. Many of the records will hold valuable genealogical data.

Ancestry.com has recently updated two marriage collections. The Oregon, County Marriages, 1851-1975 and the Weber and Piute Counties, Utah, County Marriages, 1887-1940 have some new records. Marriage records will often provide many helpful genealogical details. Depending on the year, you may find:

Washington State historic newspapers added to their digital collection of newspapers this week. With nearly 50,000 digitized pages from historical newspapers based in Centralia, Eatonville, Tacoma, and Spokane newest titles include the Centralia Daily Hub (1914-16), The Eatonville Dispatch (1916-61) and Den Danske Kronike (1916-17), a Danish-English publication based in Spokane.

The Centralia and Eatonville papers were added this month and Den Danske Kronike was added last summer, along with the Tacoma Evening Telegraph (1886-87).

You will be able to search this newspaper collection for free from the Washington State Library website.

Findmypast.com has published over 200,000 records from the 1891 New South Wales census. The census collectors’ books are the source, as these are the only surviving documents. “While they provide less detail than a full census would, they can still be a useful aid to historians and genealogists alike in placing people at a specific moment in time,” states the collection description. “Each result will provide you with a transcript and image of the original collector’s books from the 1891 census. Original images may provide you with additional details, such as the number of individuals living in the same household or the number of residents who were Aboriginal or Chinese.”

FamilySearch.org has added to its collection of Czech Republic Church Records spanning more than 400 years (1552-1963). You’ll find “images and some indexes of baptisms/births, marriages, and deaths that occurred in the Roman Catholic, Evangelical Lutheran, and Reformed Church parishes, as well as entries in those registers for Jews.” These are taken from parish registers and synagogue records now in regional archives. Though not fully indexed, the browse-only records number over 4 million! (Click here to learn how to use browse-only collections on FamilySearch.org; remember you can use the FamilySearch wiki for help in translating records in another language.)

Remember recently when we blogged about emigrant records, or those created about people leaving a country? Ancestry.com recently posted a new database called Emigrants in Bondage, which it says is “the most important list of ships’ passengers to be published in years.” Indexed are names of “more than 50,000 English men, women, and children… sentenced to be deported to the American colonies for crimes ranging from the theft of a handkerchief to bigamy or highway robbery.” The collection dates cover 1614 to 1775, after which time the British empire was not permitted to ship its “undesirables” to U.S. shores.

Also, more than 1.2 million indexed records have been added to FamilySearch’s collection of England, Sussex, Parish Records, dating 1538-1910.  Sussex parish registers contain baptisms, marriages/banns, and burials. Date ranges of available records vary by locality; you will want to use the coverage table at the FamilySearch wiki to see what’s available.

Now that the Freedmen’s Bureau collections have been fully indexed, FamilySearch is dumping them onto its website in batches. This week, they added these new databases:

FamilySearch.org has added just over 4 million indexed records to its database of United States Muster Rolls of the Marine Corps (1798-1937). The collection is described as an “index and images of muster rolls of the United States Marine Corps located at the National Archives. The records are arranged chronologically by month, then by post, station or ship.”

This week, the Fold3.com blog reminds us of its Coast Guard collections, in honor of the Coast Guard’s 226th birthday. Hundreds of thousands of search results on the site relate to Coast Guard history, from disapproved Navy survivors pension files to photos dating to the Civil War; accounts of shipwrecks or accidents, WWII war diaries for several units, images of insignia and Navy cruise books.

FamilySearch has posted a new index of New Hampshire Vital and Town Records Index for the years 1656-1938. It contains shy of half a million records of births, marriages and deaths. Entries were sourced from multiple archives in New Hampshire; the citation for each record is included in the index entry at the bottom of the record screen.

The New England Historic Genealogical Society has announced improvements to its databases for three New England cities, which now include more searchable fields and images. “Hartford, CT: General Index of Land Records of the Town of Hartford, 1639-1839, is now searchable by grantee and grantor name, and results provide the record type and volume and page of the record (available on microfilm at the Connecticut State Library). Boston, MA: Births, 1800-1849, and Dover, NH: Vital Records, 1649-1892, are now searchable by first name, last name, record type, family member names, date, and location.”