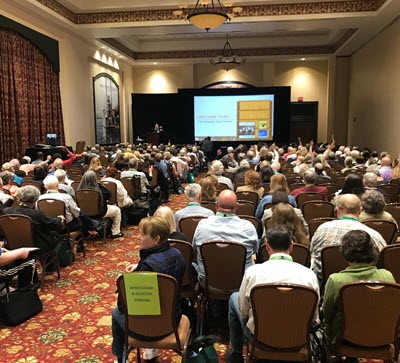 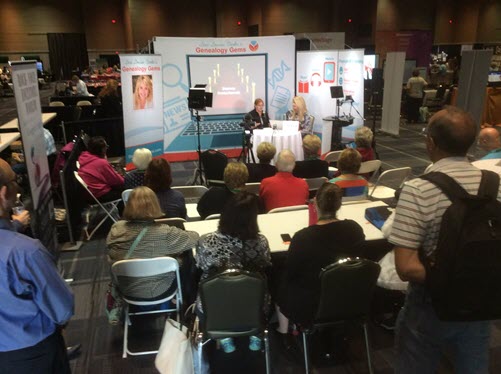 You know how it is – you head to a big conference, and you end up running for one 1 hour session to the next.  Wouldn’t it be nice to sit for just a 1/2 hour, take in some really usable tips, and still have time to stretch and walk the exhibit hall and really see the displays?

It’s easy to get stuck in the “genealogy” box (both in our research strategies and our conferences), so this year we’re going to shake things up.

At the National Genealogical Society (NGS) conference 2014 you will have a chance to get outside of that box, and enjoy 30 minute sessions on the topics you’ve told me you want most at my booth in the exhibit hall.

I’m excited to announce that I’ve teamed up with The Photo Detective Maureen Taylor, and the Chart Chick Janet Hovorka to offer “Outside the Box Sessions!” 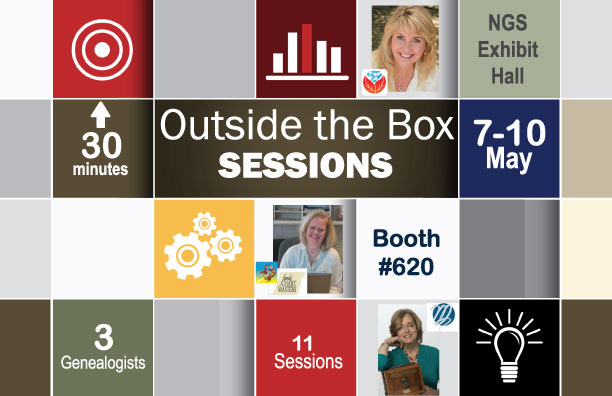 As presenters we don’t get to have the final say on which of our presentations is selected for the main conference, so it’s really exciting to have this unique way of offering the topics you ask us for. It’s a smaller intimate setting, and the sessions will be packed with tips you can start using right away. Participants can sign up to receive a free ebook of all the sessions handouts, we’ll have great prizes, and we will even have some treats to nibble on. I am really excited about this, and I think you’ll find it refreshing, fun and informative.

I’ll be holding four sessions – one each day of the conference:

And, my dear friends Maureen and Janet will join me and present some of their most popular topics too! All in all, you’ll have eleven ½ hour sessions to choose from to reinvigorate your genealogy research.

If you want to get outside the box, come hang out with us, get the ebook, nibble on some treats and break away from the crowd!

Outside the Box Session Schedule: 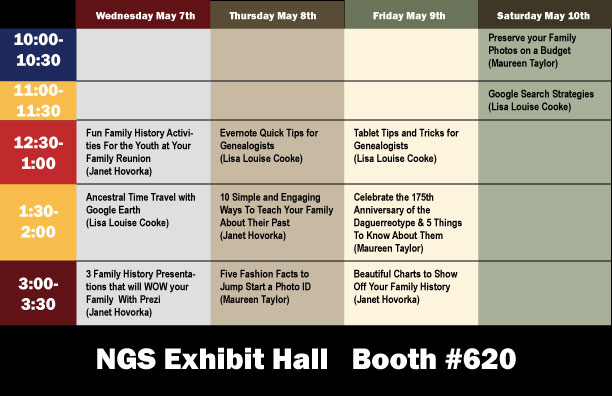 Mark your calendars: The National Genealogical Society (U.S) has announced that next year’s Family History Conference will be at the Greater Richmond Convention Center and Marriott Hotel in Richmond, Virginia from May 7 -10.

The theme for the 2014 conference is “Virginia: The First Frontier,” so you can expect to see plenty of “Old Dominion” records and history. But conference planners promise more than 150 lectures that will include “migration into, within, and out of the region down the Great Wagon Road, over the Appalachian Mountains, and across the south to Texas and beyond.” Plan to learn about the “history, records, repositories, and ethnic and religious groups in Virginia and the neighboring states of Maryland, Pennsylvania, West Virginia, North Carolina, South Carolina, Kentucky, and Tennessee. The program will also feature broader genealogical categories including military and other federal records, the law as it relates to genealogy, methodology, analysis, and problem solving. There will also be an emphasis on the use of technology (GenTech) in genealogical research including genetics, mobile devices, and apps.”

If you plan to go, get your hotel reservation in early–reservations are already being accepted, though actual conference registration doesn’t open until December 1. Check out hotel information and sign up for the NGS Conference Blog so you can keep up-to-date on news and announcements.