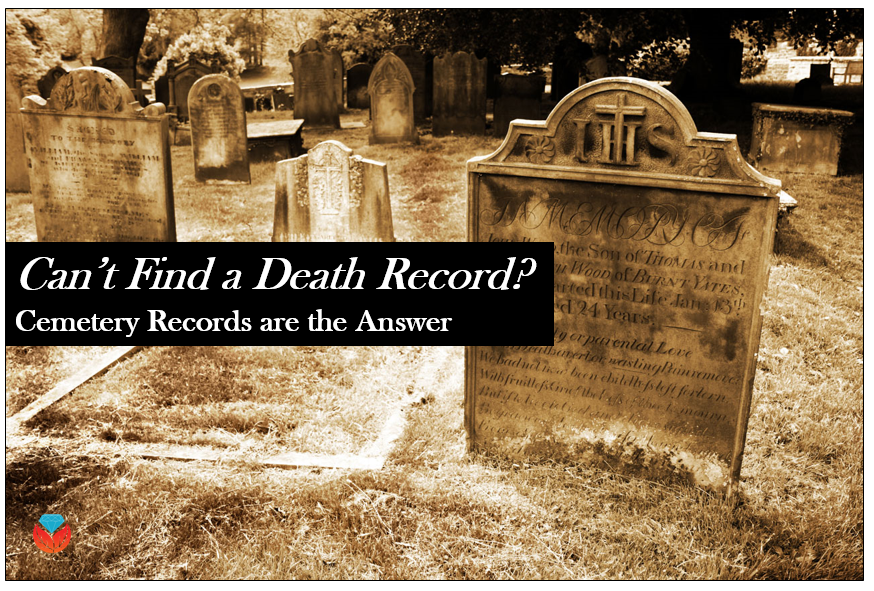 Cemetery records are a great alternative when you can’t find a death record. Here’s how to find them!

Genealogists are always on the hunt for records about the deaths of their ancestors. Death records sometimes offer a cause of death, birth information, and parents’ names. However, when a death record cannot be found, was never created, or was lost in a disaster, where should we look next? The cemetery, of course!

My father and I were visiting the cemeteries in Preble County, Ohio. We decided to take a drive down Lock Road, which is named for my ancestors. We visited the home of my two times great-grandparents, Michael and Eliza Ann Lock. While visiting with the new home owner, they mentioned the tombstone located in the fence row behind the barn. The tombstone said “Eliza wife of Michael Lock.” The tombstone is hard to read, but I was also able to make out a “13” engraved on it and I know she died August 13, 1884. My problem is that there is also a tombstone listing her with her husband who died November 21, 1928 and a separate marker that says “Mother” marking a plot in Roselawn Cemetery in Lewisburg, Ohio. Would they have moved her body when her husband died or is she still buried on the homestead? I found records at the Preble County Library that references Eliza Lock and the cemetery plot in the Roselawn Cemetery. How do I know where she is actually buried?

Just short of ground penetrating radar and exhuming the body, we may never know for sure where someone is buried. There are some things we can do, however, to get the best answer possible and maybe find some new clues in the process.

Burial Locations of the Past

According to Ohio laws in 1884, burial regulations were made on the township or village level.[1] Further, it was permissible to bury a body within 200 yards of a dwelling if the home owner gave permission.[2] [Research tip: To search the law books of a targeted area, search Google Books with a keyword phrase like Ohio laws 1884.]

It was not uncommon to bury a person on the family farm in the old days. Many people had their own family cemeteries on their property. In fact, some states still allow private burials even today. In Ohio, a person seeking to have a private burial on their property should contact the county clerk. Read more about the current Ohio burial laws here.

Theory #1: Eliza was buried at the farm and a marker was placed on her grave. Her husband died in 1928 and was buried in Roselawn Cemetery. The family decided to place a marker that had both of their names on it, even though Eliza’s body was left at the farm.

Theory #2: Eliza was buried at the farm and a marker was placed on her grave. Her husband died in 1928 and was buried in Roselawn Cemetery. The family moved Eliza’s body to the same plot in Roselawn and had a stone made for both of them.

Theory #3: Eliza was buried at Roselawn Cemetery and a small stone was placed to mark the grave. Then, forty-four years later when Michael died, the family removed the original stone and replaced it with a new one which was inscribed with both of their names. What did the family do with the old marker for Eliza? They took it home to the farm as a memento.

We can check the burial or cemetery records for Roselawn Cemetery to determine who is buried in the plot of Michael Lock, who purchased the plot, and maybe some more helpful hints.

Cemetery records can usually be found in a cemetery office, a library, online, or in many cases, the offices or home of the township trustees.

First, Google the cemetery name and get a phone number. When calling the cemetery office, be ready with the name of the individual and the death date if known. If a record is found, ask for a copy to be sent to you and be sure to offer to pay the cost of mailing it to you.

If you are unable to reach anyone in the cemetery office, try a quick online search. Many local county organizations are digitizing and indexing these records to put online. I searched for “Preble County Ohio genealogy,” and found a website dedicated to historical and genealogical records for Preble county.

A quick search for Eliza Lock provided a hit!

I noticed that there was a plot location and a death date, but not a burial date like I had seen on Michael’s index card. Michael’s card had two dates.

I checked many other cemetery records in this database. Several records created around the same time as Eliza’s death in 1884 also had no burial date. At first, I wondered if a record not having a burial date meant that the body wasn’t actually buried there. However, there were far too many records that did not include a burial date for this to be true.

I also noticed that this index card was a digital image and I wondered if it was created from some other source. It even seemed to have been altered with white-out. As with all genealogy research, if there is an original source, it should be found. In this case, I want to find out where these index cards came from. Were they created by someone who was looking at a ledger book? If so, then I want to see or view an image from the ledger book.

Since this index was found at the library website, I gave them a call first. The Preble County Room assistant told me that the images were taken directly from the files held at the cemetery (the original source). The cemetery kept little index cards as their records. Volunteers later digitized those cards and uploaded them to the website (copy of an original source). According to the person I spoke to, there is no other ledger or record book that they know of. She did tell me that the image on the internet is only the top half of the digitized record (an abstract). This is yet another reason to discover how a record was made. If I had assumed this was the original record in its entirety, I would have missed some important clues. 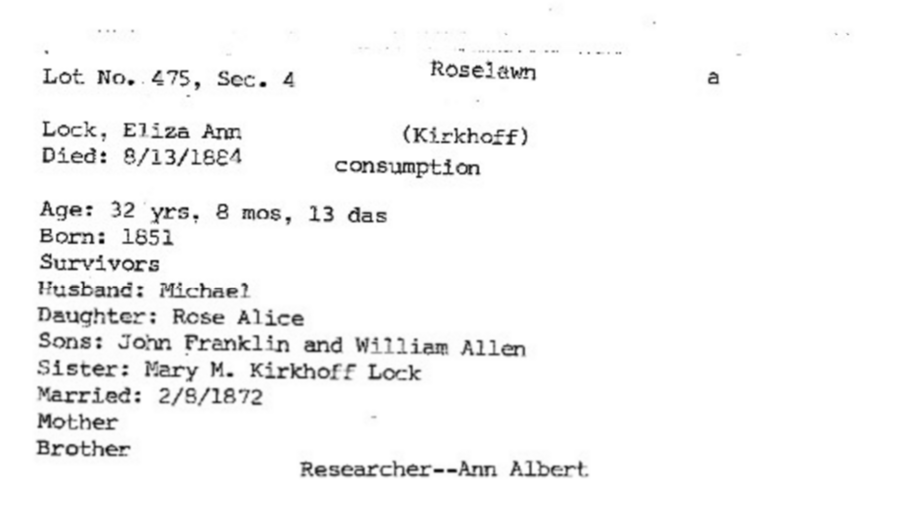 The full record held a lot more information. When I compared the lot number of Michael and Eliza, they were the same. According to this cemetery record, it seems that Eliza’s body is buried in the same plot as her husband at the cemetery. I speculate that when Michael died, the family decided to remove the original tombstone marking Eliza’s grave, put up a new one in its stead, and take the old tombstone back home instead of discarding it.

Cemetery records are a great asset to any family history research and can often hold new information. Start today and see what you can find!

[1] The Revised Laws of Ohio: Containing All the Sections of the Statutes in Annual Volumes of Ohio Laws from Seventy-seven to Eighty-one, Inclusive, Arranged on the Plan of the Revised Statutes, 1884, Google Books, (https://books.google.com/books?id=QwZIAQAAMAAJ&printsec=frontcover#v=onepage&q&f=false : accessed 20 Jun 2016,) page 87.