The Power of DNA Matching

As genealogists, we spend our time trying to ferret out the real story in our family’s oral history, or at least from the records they left behind. Record research is critical, but now we have an amazing new tool…DNA matching.

Genealogists constantly check family stories against the information on records, searching for what sounds plausible and what doesn’t. Even when we have total agreement in our records, more information often comes along…like DNA testing. In fact, DNA matching may shed light on even more apparent discrepancies.

I recently read an article in the Wall Street Journal about a reporter, Cameron McWhirter, who shared finding that kind of discrepancy between his family lore and his DNA. He even goes so far as to say, “I am descended, at least partially, from liars.” He makes the point, “many immigrants reinvented themselves when they arrived here (the United States).” This could be a nice way of saying they had a chance to invent a new legacy, not just re-invent it. His assessments were certainly interesting and worth reviewing. It helps us see how DNA testing can affect the way we look at our family stories and traditional research results.

McWhirter may be like some folks today who have never set foot inside a courthouse or scanned through microfilm, but instead relies heavily on internet research. Some of these modern genealogists never gave their family history a second thought until, like McWhirter, the death of parents started to inspire them to dig deeper. Due to the large volume of information online, the budding genealogist is “quickly pulled into the obsessive world of modern genealogical research.”

Example of an ethnicity report from Ancestry.com.

McWhirter’s personal story was that while his dad was proudly and solidly a self-proclaimed Scot, the records and DNA matching revealed his heritage was actually from Ireland and eastern Europe. McWhirter says that his “father hated Notre Dame, but judging by my results he could have been one-quarter to one-half Irish. He spoke dismissively of people from Eastern Europe, but part of his genetic code likely came from that region.”

McWhirter’s evaluation of his genetic report includes only his ethnicity results, which as you can hear, were meaningful to him in the way that flew in the face of his father’s prejudices and assertions of his own identity.

However, the ethnicity results fall short of the point of testing for most genealogists.

He has the opportunity to more powerfully transform his sense of family identity by taking a look at his match list. Here, he may see an actual living cousin who was also descended from his German great-grandmother, who maybe never mentioned that she was also Jewish.

Connecting with other cousins who also have paper trails to our ancestors serves to provide further confidence that we have put all the pieces together and honored the right ancestor with a spot on our pedigree chart. We multiply our own research efforts by finding more people like us—literally—who are descended from the same people. As long as they are as diligent in their research as we are, we can make these connections that could finally bust through those genealogy brick walls and more.

At a recent conference, I met a fifth-cousin. Even with a connection that distant, it was exciting and it encouraged us to want to look again at our connecting ancestors. To me, that is the bigger picture and the real goal—when the paper trail comes together with the DNA results and turns into real live cousins.

The Next Step: Using Your DNA Results to Find Living Family 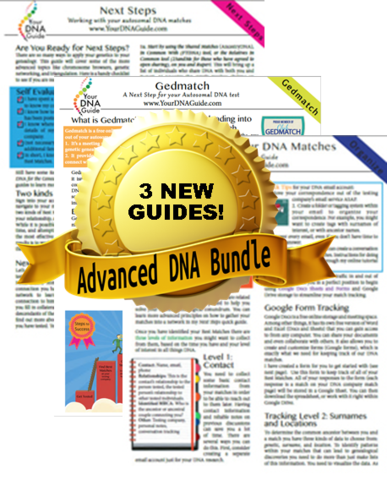 Maybe you are like Cameron McWhirter: you’ve taken a DNA test, been intrigued or disappointed by the ethnicity results, but haven’t fully explored your matches on your list. You may be seriously missing some opportunities! If that is you, I have written my new DNA quick guide just for you. It’s called “Next Steps: Working with Your Autosomal DNA Matches.” This guide will teach you how to leverage the power of known relatives who have been tested. You will get an intro to chromosome browsers and their role in the search process and access to a free bonus template for evaluating genealogical relationship of a match to the predicted genetic relationship. This guide also gives you a methodology for converting unknown relatives on your match list into known relatives.

So check it out, either by itself or as part of my Advanced DNA bundle, which comes along with my new Gedmatch guide and a guide expressly for organizing your DNA matches.