Podcasts are hotter than ever. Folks listen while doing a wide range of activities: working, exercising, commuting, cooking or simply relaxing.

That’s why it’s so rewarding when a listener takes the time to write and let me know what they accomplished using the techniques they heard about on the show or in our videos. 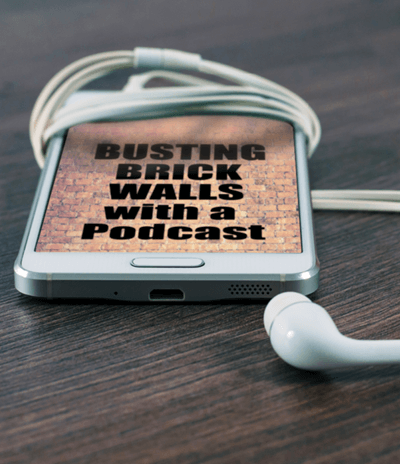 But can a podcast help you bust a genealogical brick wall? Well, according to listener and Genealogy Gems Premium member Natalie Zett, you bet they can! With Natalie’s permission I want to share her email with you today because I believe it will not only inspire you, but it also provides an excellent example of how to apply what you hear.

As a long-time listener and Premium Subscriber,  I recently put everything I’ve learned from you to the test!

I’ve traced most of my direct ancestors back to the 1500s–and have a fairly complete family tree. So, I figured that there weren’t any BIG things left to discover.

Then, a few months ago, I searched my father’s surname, “Zett,” among my Ancestry.com (DNA) matches, fully expecting to see family members that I already knew.  I wanted to know if they had photos or other records that I didn’t have so I could stay current.

I saw the list of usual suspects (cousins that I’d grown up with), but also saw a handful of new 4th cousin matches who had the surname Zett in their family trees. I had no idea who any of these matches were!

A closer look revealed that those matches with family trees shared a common ancestor:  “Caroline Zett,” who was born “in Hungary” around 1859 and died in Syracuse, New York around 1899.

The records for Caroline were scant–besides the family tree listings, there were only a few census entries, and marriage certificates for her children. Initially I thought she married into our family, but it appeared that Zett was her birth name. “Caroline” however is not a name I would expect to see.

My Zett ancestors are Carpatho-Rusyns, an ethnic minority from the part of the former Austro-Hungarian Empire that is now Eastern Slovakia.

Our surname was “Zid” in Slovak or “Zsid” in Hungarian, but in terms of first names, there wasn’t much variation.

My direct-line female ancestors were: Maria, Anna, and Elizabeta. Within their nuclear families, names were often recycled. For example, if a girl called Maria died and another girl was born later, she might also be named Maria –this made family tree work a lot of fun!  So, “Caroline” didn’t fit into that naming tradition–and, to my ears, didn’t sound Slavic.

Caroline’s husband was called John Frisco, which also didn’t sound very Slavic (the Frisco’s I knew were all Italian).  Marrying outside of one’s ethnic group in the 1880s would have been unusual, so that also was a puzzle.

And Syracuse, New York was also perplexing.  My grandparents on both sides immigrated from Eastern Europe to Johnstown, PA, and those who did branch out, moved westward. I knew of no one in the family who settled in New York. 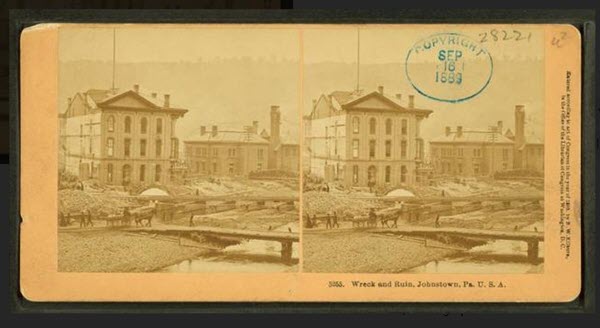 What was going on here? The brick wall I was hoping to scale was turning into genealogical quicksand!”

“So, in the spirit of WWLLD (“What Would Lisa Louise Do?”), I countered that confusion with the following actions!!

1. Created a private family tree on Ancestry for Caroline (Editor’s note: an idea discussed in episode #229) and her descendants and conducted records searches, which provided clues:

2. Used triangulation  to validate that all of these “Caroline” matches belonged to my paternal grandfather’s family.

3. Reached out to the DNA matches (heard from just one person who had no information about Caroline).

4. Also used Ancestry’s “Predicted relationship” tool, which showed that these matches and I shared the same gr-gr-great grandparents.

I took a closer look at those records though and found that Elizabeta was born the same year as “Caroline” (1859) and later married Joannes Fecko (which sounds somewhat like John Frisco). This is where my intuition kicked in and said I’d found them!

Still, I wanted to be sure, and consulted with a cousin who’s an expert on our Rusyn ancestors.  Having traveled back and forth to our ancestral home village, Olsavica, Slovakia many times, cousin Dave has collected lots of records throughout the years.  (Most of these records are unavailable online). 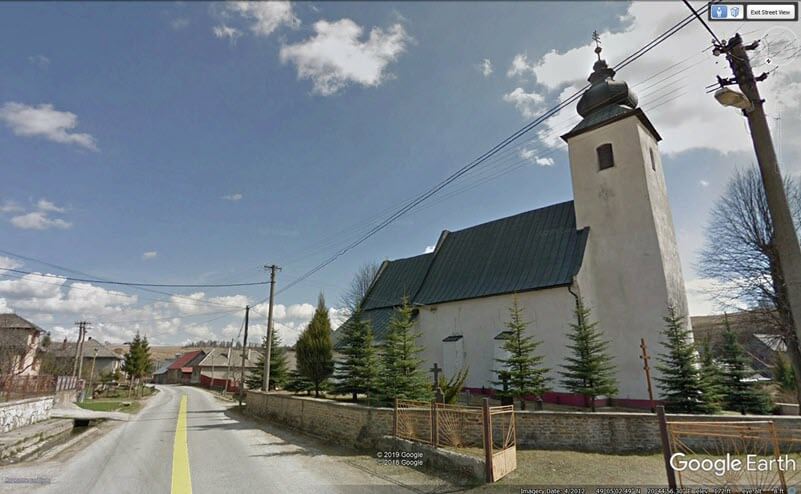 Dave reviewed these records against my research and found the marriage for Elizabeta and Joannes.  He further found the birth records for two children who were born in Olsavica. The names and birthdates of these children exactly matched the records for the children I’d located.

He concluded that Elizabeta and Joannes immigrated to America in the late 1880s and would have been among the first immigrants from Olsavica to venture to the USA.

He further theorized that, after my great-grandparents returned to Olsavica, Elizabeta and Joannes may have decided to adapt to America ways quicker than they would have otherwise to survive, thus adopting names that (to them) sounded more American.

So, Elizabeta became Caroline and similarly, her husband, Joannes Fecko, became John Frisco! Also, since Elizabeta and Joannes were living in Johnstown during the great flood of 1889, that might have inspired them to relocate to Syracuse. 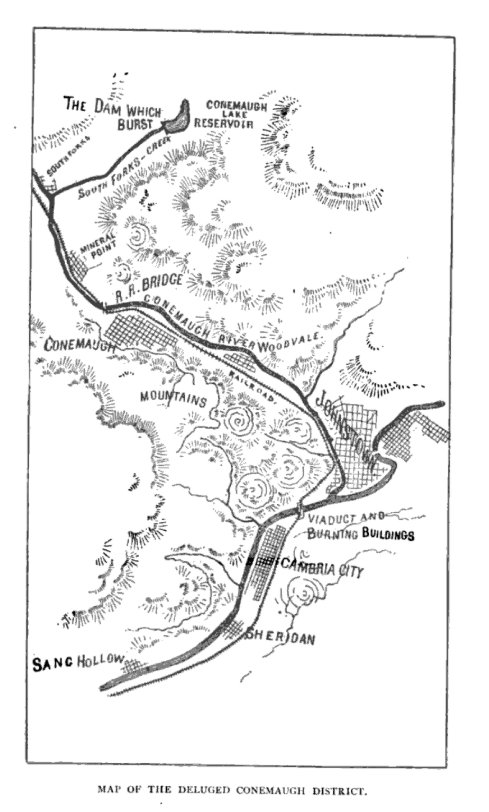 Map of the Johnstown Flood Area. The Premium Video Reconstruct Your Family’s Amazing Stories features genealogical research in this area at that time.

I can only say WHEW!

This is the first time I’ve run into this type of name switching in my ancestral research!

In tandem, I wonder if any living Frisco cousins grew up thinking they had Italian ancestry –and are puzzled as to why this isn’t showing up in their Ancestry DNA results!

Should I ever establish/reestablish contact with any of them, I’m sure they’ll be surprised as well!

I didn’t realize how much knowledge I’d absorbed (actively or even passively) from listening to your podcasts, watching your videos, and reading your articles. But whenever I hit a roadblock, I always had another tool I could pull out, e.g., Hit a dead-end with records? No problem, just study the DNA matches (editor’s note: as we discuss in many Premium videos and podcast episodes like Episode #197.) When that stops working, look at newspapers and Google Books!  I had it covered!

(Editor’s note: Here’s a listing of all our articles on Newspaper research. Genealogy Gems Premium eLearning members can watch the full length video class Google Books: The Tool You Should Use Every Day here.) 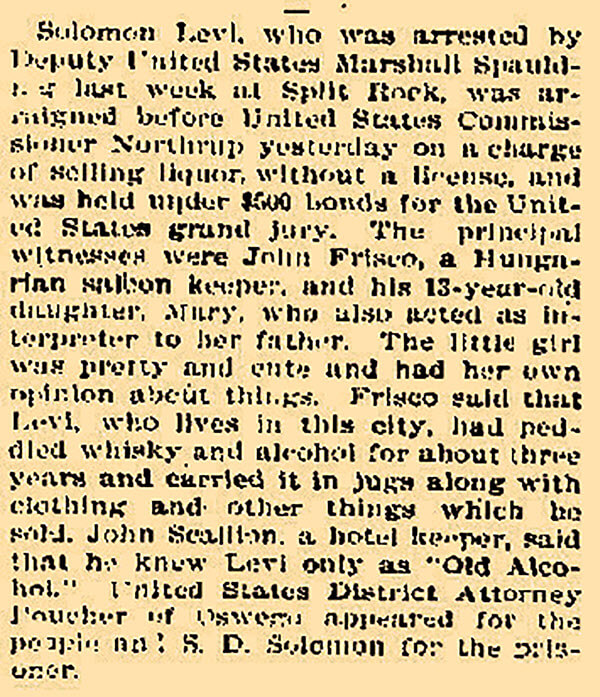 Newspaper found! “Solomon Levi, who was arrested by Deputy United States Marshall Spaulding last week at Split Rock, was arraigned before United States Commissioner Northrup yesterday on a charge of selling liquor without a license, and was held under $500 bonds for the United States grand jury. The principal witnesses were John Frisco, a Hungarian saloon keeper, and his 13-year-old daughter, Mary, who also acted as interpreter to her father.  The little girl was pretty and cute and her had own opinion about things. Frisco said that Levi, who lives in this city, had peddled whiskey and alcohol for about three years and carried it in jugs along with clothing and other things which he sold. John Scallion, a hotel keeper, said that he knew Levi as “Old Alcohol,” United States District Attorney (illegible) of Oswego appeared for the people as: S.D. Solon for the (illegible).” January 16, 1896. The Syracuse Standard.

Although I didn’t get this written until (now), rest assured that I thought of each of you at Genealogy Gems and was so grateful!

Thank you for helping me place my Great-Aunt, Elizabeta/Caroline and her descendants in their rightful place in our family tree!! It’s quite a story and I couldn’t have cracked that wall without you.

Thanks for the continual inspiration. I swear my IQ has gone up several points since I began listening to GG!

Reading the challenges faced and strategies used by other researchers can help to reinvigorate our own genealogical search. Thank you to Natalie for taking the time to write and for providing permission to share her story.

Have you made an exciting discovery thanks to something you heard on the Genealogy Gems Podcast? Please leave a comment below!